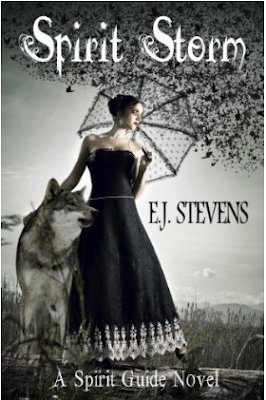 It looks like my newfound love of paranormal romance will continue, and I can pretty much blame it on one of my new favorite authors, E.J. Stevens.

A couple months ago, when I read She Smells the Dead, the first book in her series, I wrote that the innocent and almost ideal aspects of the relationships between the characters appealed to me the most. It reminded me of my own youth – actually, reminded me how lacking in sincerity my own youth was – and left me grinning by the end.

Well, with Spirit Storm, Stevens has raised the bar…in that category and just about everywhere else.

We start out where SStD leaves off. Yuki, our heroine who receives “smell impressions” from the dead, is busy preparing herself, in both mind and body, for Samhain (aka Halloween), when spirits enter the world in overwhelming numbers and could potentially drive her crazy, or worse. She is assisted by her werewolf boyfriend Cal, Simon, Cal’s werewolf mentor, and Emma, Yuki’s best friend/vegan/animal rights activist/all around spitfire.

It would be all well and good if all this group had to do was prepare for the horrors of that night. But no, fate intercedes with a tragedy: a member of Cal’s pack has been murdered by a werewolf-hater and the ghost of the dead man now haunts Yuki, urging her to help put his soul to rest. And then another werewolf is kidnapped, potentially by the same person. The small group of four is put on the case, future obstacles be damned. Can’t a girl get a break? It’s not like she doesn’t have enough to deal with.

Add to this to the stresses between Emma and Simon (they really don’t get along, though the text makes you wonder if there might be a hidden attraction that slips between the cracks during their fights) along with the pressure Cal is under now that it’s been revealed to his hidden society that he is the alpha male, and therefore leader of the pack by birthright, and we have a recipe for potentially overwhelming these poor, loveable young people.

Luckily, they’re up for the challenge.

The plot of this book is really quite simple and straightforward. As with SStD, the dialogue is impeccable and the story flows as smooth as any you’ve ever read. There are no dull moments, and even the dream sequences, which in the first book seemed to come from left field a couple times (which is appropriate, actually, seeing as that book served as an introduction, and those dreams ways to extrapolate on the functionality of the mythology presented), serve to heighten the tension this time around. The characters are idealized versions of teenagers yet completely believable, especially if you allow the language to take you on the magical ride it has to offer. Also, the author has curtailed her penchant for inserting Yuki’s thoughts into the story. Instead of being redundant this time around, they’re funny and poignant, which is a great improvement.

Perhaps what Spirit Storm does best, however, is something more mundane, more easily overlooked, especially when dealing with teenage romance. Stevens drives home the point that Yuki and Cal are soulmates throughout the story, and yet there are subtler tones there as well that bode well for future conflict. The author, while at times idealizing their behavior, doesn’t allow that to make them caricatures of young love. Instead, she inserts a rather brilliant thread involving the dangers of being too close, too young. In this way, she’s telling us that although these two wonderful creatures belong together, things don’t always end up the way we think they should. She’s careful to let her audience know that these are still children, that there will be other choices, other paths, other dangers, presented to them as time goes on. The risk comes from obsession, from thinking a situation to be too good to be true. She warns against holding on to this love, even if it might hurt to let go, because in life, when things go bad, the hurt and pain will do nothing but drag you into a deeper well of despair, the full cost of which may actually be a loss of self or identity.

As I said, this point isn’t preached about, but it’s there. And this line of reasoning is pressed up against the more surface themes of the work – responsibility, morality, and loyalty. This is illustrated wonderfully when the characters finally come face-to-face with the werewolf killer, himself. I won’t get into the particulars, but it was quite refreshing to see that a simplistic tale such as this, which often can veer into absolute shades of black and white, took the opportunity to splash massive amounts of gray on the landscape. What makes us who we are, the story asks. And who is to blame when we discover that those we’ve judged have reasons beyond our capacity to understand for acting and thinking the way they do, that their lives, and their actions, are the result of a cacophony of unfortunate life experiences? The book offers no answers to this question, only begs for forgiveness, for patience, for perspective. In this regard, I’ll even go out on a limb and say that this book may not only be an outlet for entertainment, but a teaching tool for the young, as well. It has something to say, after all, and it states its message with class and respect.

I’ve ever handed out. By the time I reached the last page, however, I discovered that I couldn’t. For as wonderful as the first ninety percent of the book is, I found the last bit a little…unsatisfactory. Again, I won’t go into detail, but there is a huge buildup to a climax that never seemed to come. I’ll leave this open to interpretation by the rest of you readers out there, because I’m only one man and perhaps I’m saddled with a need for action and resolution. Perhaps others will see the ending differently, perhaps they’ll find it perfect for the story it has to tell. But for this reviewer, it was slightly disappointing.

However, with that being said, the points I dock for this are minimal. The rest of the book is fabulous. More than anything, it is beautiful in both style and substance. It’s a quick read, and I continued to fall in love with the characters and root for them to succeed, both at the tasks at hand and at love, as the layers that make them who they are get pulled back. The romance between Yuki and Cal is refreshingly innocent yet needy, and it’s interesting to think about whether they’ll be able to grow as people or if they’ll find their only distinguishing characteristics are each other. This is a story of perseverance and devotion, both to loved ones and community, and still makes sure to let you know that there are pressures, both internal and external, that wish to rip apart everything they’ve built.

What else can I say? I adored this book, ending be damned. It deserves to be up there in the pantheon of new PR releases, right alongside Amanda Hocking, another of my favorites in the genre. I know I will be passing both Spirit Storm and She Smells the Dead down to my daughter, and I will feel confident in doing so; confident that the messages she receives from the words Stevens has put down on paper will enlighten, amuse, and most important of all, make her think.

That’s really all you can ask for.