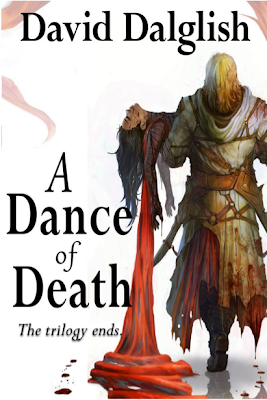 I love David Dalglish’s books. There, I said it. Everything he’s put out I’ve devoured and raved about. From Weight of Blood, the introduction to his Half-Orcs series, to his new Paladins adventures, each story builds upon the next, further enhancing and enriching the world he’s created and presenting new conspiracies, enemies, and themes.

Now we come to A Dance of Death, the climactic work of the Shadowdance series – which, strangely enough, are really stand-alone novels masquerading as a series. And I will now say, as I seem to after virtually every Dalglish book, that he’s once more raised the bar, making this reviewer swoon, sway, and cheer with each swing of the sword (or thrust of the dagger).

This time around, we find Haern, fully entrenched in his role as King’s Watcher, being led out of Velderan by a copycat killer in the town of Angelport, miles away from home. This mimic kills seemingly indiscriminately, leaving behind Haern’s old calling card, the bloody, traced eye, one he hasn’t used in years.

Haern, along with Alyssa and Zusa, head south. There are other bad things going on in Angelport – a fight with the elves over the woodlands, the proliferation of a new, powerful drug that is spreading through the streets, and the infighting between the merchant lords, who own the boats, and the lord of the land, who is slowly losing control of everything. Into this mix is thrown the Wraith, Haern’s much-too-talented, unwanted protégé, which pitches everything into a great big smorgasbord of murder, conspiracy, deceit, and political intrigue that brings the city to the brink of war – both with the elves and amongst themselves.

For the first time, Dalglish introduces a plot that is truly mysterious and isn’t concluded until the very end. While all of his books possess tremendous character development – and are usually carried by it – this one actually uses the plot itself, the mystery, to drive the story forward, using the previously stated character development to enhance the story, making the characters come to even more life than they already are. We understand Alyssa’s doubt, Zusa’s anger, Haern’s guilt, because each step of the way we’re shown why they feel what they’re feeling.

And they aren’t the only characters spotlighted here. We’re also reintroduced to Torgar, from way back in book one, who serves as the master of the guard for the Keenans, the Trifect members who reside in Angelport. We also get further insight into Madelyn Keenan’s character, who, let’s just say, is one of my favorites in the whole book, maybe the whole series. We also get inside the head of the Wraith, this mirror of a creation whose goals and actions don’t quite match up.

This is a book filled – and I mean filled – with meaning and thematic exploration. Everything from drug trafficking to environmental preservation to the question of how far is too far when it comes to the use of violence in making the world a better place are explored. Haern, for his part, is left to question his own motivations, to doubt his every action. He’s presented with a man much like himself, one that kills ostensibly at random, with no thought given to whether his victims deserve their fate or not. All of which leads Haern to wonder, what makes me so much better than him?

Because of this fact, there are no true heroes in A Dance of Death. What we cheer for when we read are incomplete people – in other words, fantasy representations of actual, real people experiencing the type of trauma – gang violence, drug dealers, vigilantism – that are found in any city across the world. All of which makes me repeat something I’ve said many times before: David Dalglish is not a fantasy author. He’s an author, period; one whose words would mean just as much if they were set in Chicago or Paris or Los Angeles as they do in Velderan…or Angelport.

The bottom line is this: A Dance of Death is a great, great read, a much more than worthy offering to close out a fantastic series. The characters are great, the story even better, and it has enough twists to make your head spin. We even get to see elves portrayed being not-so-elflike – you know wise and mystical and peaceful and all that – which I absolutely loved. There is heartbreak and anger, betrayal and gut-wrenching decisions, as well as some rather inspired deaths. I heartily recommend it, as I would all of the author’s books, and can honestly say I hope he gives us more of Haern’s story in the future, because there has to be more to tell.

Yeah, this is pretty much the perfect novel. You won’t be disappointed. And if you are, that’s on you, not the work.

If you want to read this fantastic work for yourself, buy them in Ebook format at the following sellers: 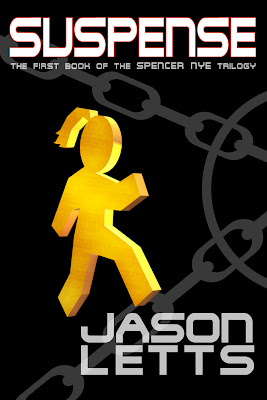 In certain ways, Facebook has become an integral part of my life. I spend way too much time on it, conversing with friends, making connections, sometimes simply passing the time. It’s become a useful tool, but also a slightly frightening one. If you were to think about how connected everyone is through these bits of data flowing invisibly all around us, it would be very easy to come up with a nightmare scenario where we not only use programs like this as a tool, but they become necessary to continue our way of life, a world where without social networking, the whole of society would be lost.

Jason Letts took this scenario, fleshed it out, and in a flash of unique and original storytelling created Suspense, the first book in his Spencer Nye Trilogy. To say I was impressed with what he came up with would be a grand understatement.

Suspense centers around the exploits of the girl for whom the series is named, Spencer Nye herself. She is a gritty character, full of anger and distrust. She is also a diehard, one who will do anything – even kill – to protect and defend the image and life of her Idol.

What is this all about, you ask? Diehards? Idols? Well it seems that in Letts’s brilliant new universe, the general world populace uses a program called Connect – the most powerful social media ever invented, accessed through nodes implanted into peoples’ skulls – to, well, keep themselves connected. They float through life only half-existing in the real world, spending the rest of the time immersed in the data that flashes in front of their eyes, reading up on the latest trends, what their friends are up to, or just perusing. I found it to be a quite disturbing visual the first time I read a scene depicting this, representative of a world where the flesh is at times looked at as a hindrance.

A good chunk of society also uses Connect to keep up with their Idols – basically folks who’ve gained so much popularity, so many followers, that they’ve become, in a certain sense, godlike. All six of the Idols live in a fortress on a hidden tropical island, to keep them safe. And the animosity between the diehards for each of them is frightening. They’re constantly at war, constantly killing each other, with the end game being to elevate their Idol to an even higher level. It’s a scary thought.

The specifics of the society the author created are interesting, even beyond the whole social networking angle. There is no more industry, as anything anyone would ever need is created simply by pressing a button on something called a molecular synthesizer. There is no more crime – other than diehard-on-diehard violence – as why in the world would you have to steal if it everyone had everything they wanted and money no longer existed? And people get around by using terminals that transport them from place to place in the blink of an eye, simply by pushing numbers into a keypad.

In a lot of ways you could look at this and think, that’s not so bad. On the surface, this society is bordering on a utopia, but with the loss of personal freedom that comes with everyone knowing what’s on your mind at all times, and the amount of fanaticism the Idols create, it steers in the opposite direction and becomes pure dystopia. With a lack of purpose, a lack of direction, it leads folks to act irrationally, to search for meaning in a world that, in truth, means absolutely nothing.

The story itself is an adventure, as Spencer and her friends, a cyborg named Jetta and a programmer named Patch, seemingly uncover a plan to take out the Idols – including theirs, the actor Cleary Mintz. This leads to a great many action sequences and a rather ingenious plan, thought up by the three friends, to turn Spencer, herself, into an Idol and fix the situation from the inside.

What follows is a great amount of intrigue and a further exploration into how this whole world started in the first place. There is mystery, paranoia, and a hint that the direction society has taken was orchestrated by something wholly not of this world. And in the middle of all this is Spencer, the unstable teenager whose only desire has ever been for her life to have meaning.

This is a very good book, folks. Suspense is resourceful and technical, a mix of science fiction and dystopian fiction with a truly original premise. Though written for a young adult crowd, it’s definitely been created for an older audience. There are scenes of violence, confusion, and at one point a rather inspired scenario of sexual exploration while not in one’s own body, experiencing the sensations from the opposite viewpoint. The book is obviously not perfect – what book is? – but it’s more than worthy of your time and energy. In fact, I’ll go a step further to say this particular work of fiction may be important, as well. It allows us to look at our own actions, how much time we spend on the internet “connecting” with people while ignoring those who are standing right beside us, and urges us to find balance.

It’s a difficult tightrope to walk, and the author shows us what might happen if we fall off. Brilliant.

Purchase Suspense in Ebook format from the following sellers:

Posted by RJ Duperre at 1:02 PM No comments: