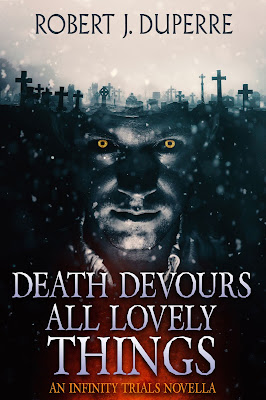 For anyone who's just dying to delve deeper into the backstory of The Infinity Trials, I just released a 100-page novella that focuses on the history of Edwin, the grumpy vampire introduced at the end of "Boy in the Mirror," who acts as Jacqueline's guide for the remainder of the series. It's a story that goes from 19th century Ireland to America in the near future—or at least one of the many futures that are possible in the overarching world I've created.

I'll post the blurb now, but please read on after the buy links for updates on how the final Infinity Trials volume is progressing.

Edwin Vyse has never found the balance between being a man and a monster. For all of his unnaturally long vampiric life, he's been alone, never felt the sun on his skin, and been forced to kill to survive. His life, if that's what it can be called, has been a persistent dance along the edges of reality, a fever dream he cannot awaken from.When fate brings him into the orbit of a beautiful graduate student, however, things begin to change. Maybe love can, indeed, kill the beast. So long as his monstrous nature doesn’t ruin everything.Robert J. Duperre presents an epic novella of love, loss, and murder, chronicling the life of one of the major supporting characters in his urban fantasy series, The Infinity Trials.

Now, on to how the final book in the series is progressing.

Let me just say this—I've had far more difficulty with "God in the Girl" than any other book I've written. Personal tragedies and the subsequent depression have made me put the book on hold for long stretches, which has led to me having to re-familiarize myself with the story whenever I've gone back. This is a complex story, with many moving parts, and tying together all the different plot threads in a satisfactory manner can be mind-numbing at times.

However, it's starting to flow a little more freely now. I'm roughly halfway done, and I'm confident that once the momentum of the end starts rolling, so will the speed (and competence) of my writing. I'm not going to give a time frame for when the book will go live. When it's finished, it's finished, and I refuse to rush it. "God in the Girl" will be the culmination of my vision for an entire shared world, so I have to be careful with it, which includes being diligent with edits so that it flows well and tells you, the reader, everything I wish for you to know.