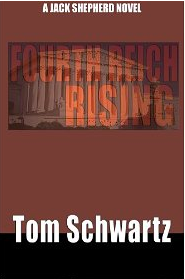 I have struggled with writing this review for a few weeks now. I know what I want to say, but the hard part is figuring out how to say it in the most gentle way possible.

Fourth Reich Rising by Tom Schwartz is a very strange book. It starts out interestingly enough – with a prologue introducing us to Eric Goering, son of Hermann Goering, and offering a very haunting statement on the purpose of the Third Reich and plans put in place by those who’d constructed it to reform the idea if ever the Nazis lost control of the power they’d built. It was this prologue that pulled me in and made me want to review the book.

However, after this prologue, everything goes downhill. What we have here isn’t a novel, but an outline for a whole series of novels.

The story goes something like this: The children of all the former Nazi leaders and their remaining families come together, led by Erich, to facilitate the recreation of the Reich. The history is explained – in mind-numbing detail – of how they go about this, from college all the way up until present day. Then there is a cruise ship, upon which are mystery writer Jack Shepherd and his friends. The ingenious plan by the new Reich is to smuggle a nuclear warhead from the Ukraine, stow it away aboard the cruise vessel, detonate the bomb in New York Harbor, and all the while create enough “chatter” to blame the whole shebang on Iran and the Saudis, then organize all the white supremacists in the US and bring the government down.

Now this is all well and good, and as outrageous as it sounds, I’ve read pretty entertaining books that have presented much less believable scenarios. But the writing is so robotic and tedious, it is, like I said, an outline more than a novel. Even the “fun” scenes involving Shepherd and company come across as completely emotionless. Here’s an example passage from the text, so you can see what I mean:

Tonight they all ordered lobster. These were one-and-a-half pound Maine lobsters with drawn butter and crab stuffing. Jack said, “People, we can’t have lobster without wine,” and he signaled the wine steward. “Three bottles of Schwartenkatz Rhine, please.” As usual, the service was great and the wine went down easily. When it came time for dessert, no one was interested until Judi spotted baked Alaska on one of the tables next to them.

“I can't take any more of this. I’ll have to buy a new wardrobe,” exclaimed Bob, but he ate his entire dessert anyway.

And this is seriously one of the more exciting segments. The entire book reads this way, only often time even more stilted.

Another major gripe – the supposed main character is, of course, Jack Shepherd, mystery writer. Hell, his name’s on the subtitle. Two problems with this. #1, he’s flat as unleavened bread. (But then again, all the characters are, so why should he be any different.) #2, he appears in literally one-third of the book, at most. That’s right, most of the story deals with the reformation of the Reich, the plans of the Reich, how the Reich kill people, how they spread fear in rather simplistic ways, and so on. It becomes more than tedious. At certain points I started wishing I was reading my son’s accounting textbook instead.

With all the being said, the reason I’ve waited so long to write a review is that I appreciate Tom Schwartz’s point of view. Especially toward the end, when all these outlandish and excruciatingly boring plot points come together, the author is able to write more freely, to illustrate his rather beautiful perspective of the world to us in a touching, albeit slightly naïve-sounding way. I appreciated that, and thought that maybe the book could be saved if he could only hold on to that tone and stretch it out a little longer. But no, soon we’re back with the Reich as they try to escape the authorities after Shepherd helps thwart their plans (in possibly the most ridiculously overstated part of the book.)

There is also the strange tendency the author has to start just about half his chapters in present tense, introduce a huge block of dialogue, and then – bam! – the rest of the chapter is in past tense. It’s seriously one of the most odd and baffling conventions I’ve ever seen, in any type of literature.

I could go on, but I’m going to stop here. I don’t want to keep piling it on, which I feel like I’m about to do. All I have to say about Fourth Reich Rising is this: Tom Schwartz is a man with a lot of good to give the world, a lot of ideas about community and nationalism and religion and loving your brother. He’s defended our country in the military and is an upstanding, thoughtful individual.

He just can’t write. At least not yet.

Agree with me? Disagree? Buy the ebook if you wish, and let me know:

Where on earth has the Journal gone?

Come tomorrow, it will have been exactly one month since I've posted a review on this site. Oh, the horror! I'm here to inform you that I've not left you stranded, my few readers. Rather, I've simply been quite busy.

On January 5th, 2012, I will be releasing the 3rd installment of The Rift, "Death Springs Eternal." In other words, it's been crunch time over in these parts. The beginning of the book stifled me a bit, as I wanted to take it in a bit of a different direction from the previous book, "Dead of Winter." Because of this, my numerous other projects have taken a backseat - reviewing being one of them.

This does not mean to say that I have stopped reading. I haven't. Not in the slightest. In fact, there are five - count 'em, five - books that I still need to craft a review for. I've been pushing them back, as reviews take me usually about an hour or so to write and I've been paranoid about not meeting my deadline. However, I seem to be back on track, so the next review will appear this coming Wednesday, October 26th. The books to be reviewed go as follows:

Also, in case anyone hasn't noticed, I've removed the submissions page from this site. That's right, I'm no longer accepting submissions. At all. I'll take suggestions, but from now on I will be reading what I want to read. I think part of the reason I've lost a little bit of interest in the reviews is that there have been quite a few books I've started, and then stopped reading after a few pages because they weren't very well written or just didn't interest me. What's the solution? Why, to read what interests me, of course! So that's the way it'll be from now on.

So, that's it for today. Take care all, and see you this Wednesday.