It’s a wonderful season here in rural . Spring is in the air; the days are getting warmer, the trees are starting to bud, chipmunks and squirrels are skittering about, and the grill’s been broken out on more than one occasion. Also, this is the most productive time of year for me, so allow me to fill you all in on what I’m currently working on, what’s steamrolling down the pipeline, and what’s still to come.

Let’s start with a biggie.

The first book in my planned Knights Eternal trilogy, slated to be released by Ragnarok Publications in July of this year. Since the pre-order for the paperback is already up over at Amazon, this is a good time to reveal the splendid cover that artist Pablo Fernandez created: 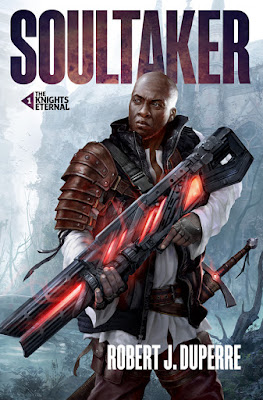 Amazing, right? I’m pretty damn excited about this tale finally seeing the light of day. I’ll have more on the project as we move closer to the release date.

The 2nd book of The Infinity Trials is finished, coming in at a brisk 344 printed pages. Editing is done, proofing has been completed, and formatting is mostly all set. All I’m waiting on now is a cover, which Jesse Young is currently slaving over and should be finished with…soon-ish. As soon as said cover is done, all it will take is a short amount of workshopping—perhaps two, three days, tops—along with finishing the formatting, and then it will be available for purchase. So get ready for more dark adventures from Jacqueline Talbot and her band of misfits. It’s gonna be a good one.

LOST IN THE SHADOWS

The 3rd Infinity Trials book is also finished, from a pure writing perspective. I’ll be sending the manuscript out to my editors and proof-readers some time in the next two weeks. Of course, I’ll also need a cover for this one too, which means I’ll be putting Jesse to work again very, very soon. No rest for the wicked, eh?

Right now, we’re looking at a mid- to late-July release. Hopefully, that’ll come to fruition, but I can say, with a smidge of confidence, that we won’t be pushing too far past that time. This is, so far, my favorite of the Jacqueline books, one where I got to experiment a little bit. It's also by far the longest, coming in at a sizable 460 printed pages. I hope you’ll all be as happy with the outcome as I am.

QUEEN OF THE DEAD

As of this moment, I’m approximately 33% finished with the rough draft of this novel, which will be the 4th—and penultimate—volume of The Infinity Trials. This one has been proving slightly problematic, but in a way that will end up being positive for the reader. I’ve had to keep myself honest, beginning the process of tying up all the loose ends I’ve created over the previous three installments. It can be a painful process, but the payoff will be spectacular. That much I can guarantee.

My soft prediction is that this book will be released a week before Halloween, a good time for something called Queen of the Dead to see the light of day. I’ll certainly keep you updated as progress moves along.

As Boy in the Mirror is the only Infinity Trials novel to have been released as of this moment, readers have only just briefly been introduced to Edwin Vyse, who is rather important to the plot moving forward. The character is based on a short story I wrote many years ago. He has a rich history, and I feel that history needs its own outlet, as it’s a little too involved to include fully in the scope of Jacqueline’s story.

My plan is to take the next two months and completely rewrite that original story, lengthening it and turning it into a novelette/novella. I’ll be doing this using what is normally my “reading time,” aka the free moments available to me at my day job. Therefore, the book I’m reading right now—the indomitably awesome Husk, written by old favorite D.P. Prior—will constitute the last review to appear on this blog until this story is finished.

Once completed, I plan on releasing Wiedergeboren as both a cheap read and a freebie gift for those who sign up for my newsletter. For those who’re longstanding fans (I know who you are), I’ll gladly send out a complimentary copy if you so desire.

And…that’s about it for today! We’ll chat again soon, folks. Until then, I’ll keep my nose down, and keep on workin’.
Posted by RJ Duperre at 11:59 AM No comments:

REVIEW: Queen of the Void (The Void Queen Trilogy Book 1) 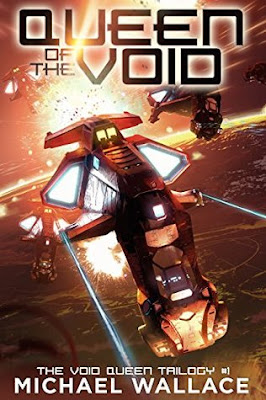 Michael Wallace is an author who cut his teeth on fantasy, then made a name for himself writing gothic contemporary thrillers, and moved on to finding even more success in historical fiction.

So obviously, when I went to dive into science fiction again after years of ignoring the genre, he’s the author I chose.

It ended up being a very wise choice.

A positive aspect of authors who find success in multiple genres is that the aspects of those different genres bleed into, even precept, their current projects. In Queen of the Void, the first novel in the Void Queen trilogy, Wallace uses this to great success. What the author has created is a universe hundreds of years in the future, where space travel is the norm and alien races have both been discovered and warred against, that reinvents facets of his vast knowledge of fantasy and history.

This is a space opera that borrows from our real, earth-time history. It’s a reimagining of the height of the , set on starships in the middle of the inky blackness of space instead of the Celtic, North, and Norwegian seas. The various cultural sects directly correlate to the players of 11th- to 15th-century European history: Albionese are the Britons at the height of their colonialism; the Landino represent Spain, Britain’s sometimes-ally and explorers of the high seas; the Singaporians call on the Song Dynasty’s ingenuity and technological advancements; and finally, the Scandians, the Vikings of lore, only here Wallace subverts expectations—instead of a plague bringing an end to the constant raiding and occupation of a hyper-aggressive people, it instead serves as the reason for their burgeoning bloodlust. Rather brilliant, if you ask me.

The story itself is rather simple: Catarina Vargas, the youngest daughter in a longtime pirate family, has decided to settle her own isolated nook of the galaxy. Only her plans are thwarted by the Albionese Royal Navy, who then bring her on to help set up an outpost in Scandian space, to allow for the Navy to build a supply line for a continuation of a war with aliens (bird-like beings called Apex) that is sure to come. Of course, wackiness ensues, and it’s all rather glorious.

Wallace has done a lot of work to invent a concept of space travel and warfare that is believable, and again based on very real history. The concept of traveling through jump points to different sections of the universe is an old one, but the author does a bang-up job of making it not so easy of a proposition. The prospect of space-warfare-as-naval-battle is another tried and true model, used here to an effect that almost borders on hyper-realism. I really can’t say enough about how expertly these battle scenes are put together, how well they flow, and how gripping they feel. It all just seems so real, even the parts you know are logically impossible, which is the highest praise you can give to a work of science fiction.

In closing, let me say yes, this book is awesome. I’ll be checking out the rest of the series soon, and then likely dive into the set of novels Wallace published before this, titled Starship Blackbeard, which takes place in the same universe. So get this book, people. It’s a hell of a smart, enjoyable ride. You’ll have a good time, no matter what genre you prefer.

Purchase this book on Amazon, or read for free with Kindle Unlimited.
Posted by RJ Duperre at 12:22 PM No comments: 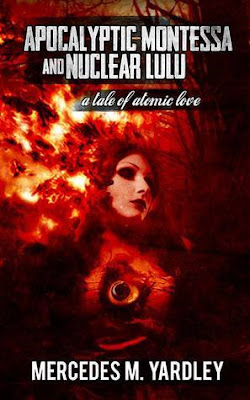 Life isn’t always cut-and-dry. Sometimes, the most terrible of circumstances can directly lead to the most wondrous acts of creation. A personal tragedy can spur an artist to craft their life’s seminal work. Addiction can result in the addict steering an otherwise ill-fated existence onto a path of hopefulness. Society can rally around a national catastrophe, bringing people together, opening up pathways to communication and goodwill. This is true even on a cosmic scale, when something as violent as the Big Bang leads to the creation of life, itself.

And sometimes, an abused woman and a serial killer can find love, because existence can be the darkest of jokes, whose punch-line is hidden beneath layer after layer of human frailty. It is a play in ten thousand disjointed acts without an ending. A contradiction that is at once both alluring and terrifying.

Apocalyptic Montessa and Nuclear Lulu is all of this, and so much more.

Mercedes Yardley, as an author, is herself a contradiction. Her work is darkly whimsical, gorgeously macabre, optimistically cynical, and outwardly aloof, with a dash of cheerful angst thrown in for good measure. Her gift with prose is magical; she’s very nearly creating long-form poetry, channeling every bit of darkness you could imagine, stuffing it into a black hole, churning and squeezing and choking the emotions for all they’re worth, and spitting out something absolutely breathtaking on the other side.

I really cannot say enough about this book. Sure, you can likely find many antagonists as depraved as Lulu the serial killer. Yes, there have often been Fallen Woman heroines that are as lonely, pathetic, and cursed as Montessa. But you would be hard pressed to find another work of fiction that could demonstrate as much dreadful wonder in their mutual discovery of each other. One is evil, the other tortured; together, their story is somber, ugly, and yet eye-mistingly wonderful.

And yes, there is a message lurking within the beautiful prose, hidden in the glint of Lulu’s First Kill Knife. Buried beneath the layers of Montessa’s abuse. Lingering inside the suffocating miasma of ambiguity that governs both of their thoughts.

But what that message is, is up to you to decide.

That is the last contradiction Yardley has given you.

Damn, how I love this appallingly beautiful book.

Purchase this book at: