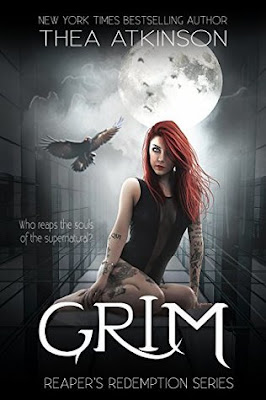 A while back, I reviewed a fascinating literary novel titled “Anomaly” that chronicled a few days in the life of a tortured gender-fluid character named J. The book completely surprised me, and I fell in love with it. (Unfortunately, that particular title is no longer in print, so the world has lost out on reading it…for now.) So when I found out that the author of that little gem, one Thea Atkinson, had pivoted her peculiar talents toward Urban Fantasy, I just HAD to pick up a copy of “Grim” and see for myself how someone with a unique voice such as hers would tackle the genre.

And let me tell you, she tackled it perfectly.

“Grim” is a gem of a book. It is the story of Ayla, a young girl on the cusp of womanhood whose life has been anything but easy. As a child of the foster care system, she has all the insecurities and hang-ups of someone who’s shuffled from home to home. Her distrust lingers even now that she’s found relative safety living with her grandfather in the town of (great naming there). She’s a contradiction, as most real people are—flawed yet idealistic, fragile yet brimming with inner strength.

Atkinson doesn’t waste time, as the story starts with a bang, an encounter with a strange, tattooed killer in an old gothic church. It is this initial confrontation, and all the horror that goes with it, that begins a breakneck two days for our young, ornery heroine. There are secrets revealed almost immediately, both supernatural and otherwise. The author sure knows how to frame a fight scene, and the action is excellently paced. When reading this book, there really is not time to stop and catch your breath, which only adds to the urgency of the tale.

As with “Anomaly,” Atkinson shows off her biggest talent: the depth of her characters. The story is told through Ayla’s eyes, so obviously she is very well developed, but the rest of the cast, from her grandfather, to Callum the young and seemingly conflicted firefighter, to Ayla’s witchy friend Sarah, leap of the page in real-time. All three of them are complex individuals disguised as genre tropes, which makes them at once relatable and utterly mysterious.

And oh, the mysteries! One of the areas that I’ve seen most authors struggle with when creating any fantasy world is makeup and definition of the world itself. World-building, if you will. Here, Atkinson shows an almost saintly amount of patience. Even though we learn almost immediately of what Ayla’s big secret is, the functionality around that secret, the rules of engagement, and the underlying mythology are doles out bits and pieces at a time, sprinkled here and there throughout the narrative, slowly building the universe like a puzzle.

Being the first book in a series, of course that puzzle isn’t completed by the time the last chapter comes to a close. But what’s revealed up until that point is more than enough to have the reader pining to get to the next book. Which, really, is what the opening volume of a series is all about.

So yes, “Grim” is a great little book, and way more than it seems at first blush. The earnestness that drips like viscera just below the genus of the common is more than enough to make me honestly say, “More, please, and right freaking now.”

Purchase "Grim" at the following outlets: