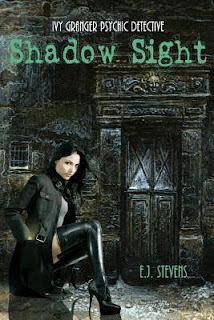 It’s been quite a long time since I’ve written a review of any sort, so I figured that diving into a sure thing would be the best possible way to reacquaint myself with the process. So I chose a book by E.J. Stevens. Why?

Because for me, E.J. Stevens is pretty much the definition of a sure thing.

I’d read Stevens’ Spirit Guide series years ago, and given how much I appreciated the furthering adventures of young Yuki Stennings and her odd penchant for smelling the things dead people wanted to show her, I figured that Shadow Sight would offer me more of the same.

I was only sort of right about that.

Shadow Sight, which follows Ivy Granger, another quirkily-named and supernaturally-gifted protagonist, wasn’t totally what I expected. It isn’t stereotypically Young Adult—all the main characters being are in their mid-twenties, and there are many very adult references that snuck their way into the text—yet still carries that prevailing “innocence of discovery” that marks a lot of YA literature. Only is goes way further.

Ivy’s a psychic detective, you see, operating (with the help of her assistant/best friend Jinx) out of the fictional coastal city of . The location itself is where we find the most separation from traditional YA fare. Harborsmouth is chock-full of fantastic creatures, a veritable fae nesting ground that every mythical beast, from hobgoblins to vampires to succubi to kelpies and selkies, call home. Myths are effortlessly blended from many different areas of the world, and many religious/spiritual beliefs, as well. This is some epic world-building, with Stevens seemingly calling on the Lovecraftian constructs of Innsmouth, Arkham, and Dunwich—places where the barrier separating the real world from the fantastical one is thin at best.

The painstaking way Stevens builds her world does tend to bring with it the one and only fault I can see in this book, in that descriptions placed in the middle of character interactions can occasionally make the communication feel clunky, full of stops and starts. However, this is really a minor critique, as, just like with Spirit Guide, the author demonstrates an adept talent for dialogue, and these instances are the exception rather than the norm.

The plot itself was surprising to me, much grander than I expected, with far more at stake. The action is descriptive and raw. When there is loss and horror to be seen, the reader does indeed see it, though there is care demonstrated here as well, a sort of sensitivity that would allow even a sensitive booklover reach the end without becoming revolted.

But the place where Stevens really shines is her characters. Ivy is front and center, of course, a somewhat hesitant heroine who, because of the volatile nature of her “gift” (she sees visions of the past whenever touching an object—any object—with her bare flesh), has become riddled with phobias and prone to irritation. Which makes her both fresh and very believable. Every character Ivy interacts with, from Jinx, to her ancient witch/mage-friend Kaye, to the unfortunate juvenile troll Marvin and Kaye’s house goblin Hob, has their own distinct personality and way of speaking. Each is a joy to read, and made turning the page that much more of a pleasing experience.

Overall, this is a truly entertaining bit of fiction, with high stakes and a ton of heart, and which sets the stage for what promise to be exciting adventures to come. Count me among those who’ll be diving into Ivy’s next adventure very soon.

Click on the following links to purchase Shadow Sight:

Posted by RJ Duperre at 5:15 PM No comments: