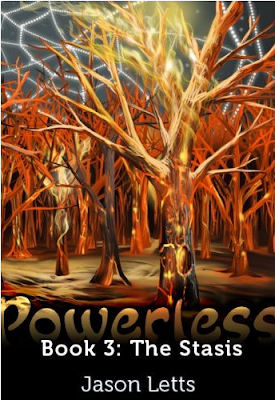 Growing up. It’s hard. It sucks. Our heroes are revealed to be mortal and flawed, our presumptions about the world are constantly proven untrue, and the evils that surround us, which we’ve been gleefully naïve of in our younger days, slowly trickle into our consciousness, threatening to crush our spirit. Often, when I look back on this myself, I wonder how I was able to keep a positive outlook on life. But the thing is, that positive outlook was learned. It came from realizing that I didn’t really want to dwell on the bad, that I wanted to appreciate what I had, the people who loved me, while they’re still here.

That, in a nutshell, describes the atmosphere of The Stasis, the third of the Powerless series by Jason Letts.

As with book two, the story picks up where the previous volume left off, with Mira, the powerless girl in a world where everyone else has superpowers, leading her fellow students from Dustfalls Academy into the war after her failure to win the Rite at Shadow Mountain.

In book two, Mira learns her rather sordid history (which I will not disclose here for fear of a major spoiler for those who haven’t read it), and in The Stasis her emotional deconstructions is complete. Whereas she was once full of wonder and innocence, she now carries herself with a coldly logical hardness that is difficult to see from a character that’d once been so glowing. But it makes sense; her definition of self has been stripped away, leaving behind a skeleton of her former life that she’s ill equipped to reconstruct. So she does what people do when they’ve been abandoned by hope – she latches onto an ideal (to free her sister from the clutches of the army her people are fighting against) and pushes tirelessly and fearlessly for that goal, all else be damned.

Along the way she alienates her friends, becomes involved in a great many battles, and gets wounded (physically as well as emotionally). From there, the meat of the story deals with Mira trying to rediscover the love and purity she’s lost.

This is a very dark book, especially for something in the young adult genre. Quite a few characters are killed off (thousands, actually, if you count all the soldiers fighting in the war), and those that do survive are stricken with such difficult circumstances that their guilt threatens to overcome them. You have to remember that these are sixteen-year-old kids the author has written about here, and they’ve been asked to risk their lives for what amounts to opposing principles they haven’t the maturity to grasp. The senior officers of the army treat them like fodder and are willing to sacrifice them at a moment’s notice to simply prove a point, which brings to mind some very real circumstances that have occurred in our own military during the last ten years or so.

And yet these kids do fight, they do push themselves to the limit, and that aspect of the storyline owes itself to simple survival. When the chips are down and you don’t understand what everyone’s fighting for in the first place, it’s your own life and the lives or your friends that end up mattering more than anything. I couldn’t help but think of World War II and the stories my grandfather has told me of the young people in his platoon stepping up when their superiors went down and all seemed lost. Like the characters in The Stasis, my grandfather fought to keep his friends alive. In that way, this book acts as homage to the stories of these wars past and the grand sacrifices much-too-young individuals had to make during battle, when death surrounded and threatened to swallow them whether or not they stayed on their toes.

Speaking of battle scenes, The Stasis has a few of them, and they’re all pretty grand in scale. They’re confusing to read, what with so many different people having so many different powers that affect their surroundings in so many different ways. This could be looked at as a drawback, but I ended up appreciating the execution. When I found myself being confounded by what was going on, I put myself in the characters’ shoes; if it was difficult for me, the reader, to follow, how must it be for those involved? Reading them actually made me tense, which in books usually only happens during overly emotional scenes.

With all of this violence and the overarching spiral into different facets of the social unrest that started this war, it would’ve been easy for poignant characterization to fall by the wayside. However, the opposite happens. Even with the confusing mess of fighting, the characters actually come more alive, gain more depth, prove more of their usefulness as metaphorical vehicles. Each individual grows and demonstrates just how pure of heart and mind they are, even those that make irrevocably bad decisions. I applaud Letts for this, because he definitely didn’t take the easy way out.

I had very few problems with this book. At times I found the dialogue stilted and robotic, and still the head-hopping persists, but I’ve come to simply accept these as a part of the series’ voice. I’ll no longer dock points for it, considering that if you’re here reading this review it most likely means you’ve already read the first two books. It’s still a wonderful and emotional read, one that I’m growing to appreciate more and more with each installment.

Before I end this review, there’s one last thing I want to mention. With all the death, destruction, and ominous foreboding in this book, there is one particular scene towards the end that jumps out. Letts does something I didn’t expect – he takes these characters that he’s lead through the ringer and allows them to once more rediscover their youthful innocence, if only for a fleeting few moments. I was taken aback and made to feel rather morose. Again I thought of my grandfather, eighteen years old and trapped behind enemy lines. Did he take the time to engage in a games and laughter in the down times, those moments when the fear of imminent death took a much-needed breather? If so, did it help steel him against what was surely to come next? It seems like such a depressing state to find oneself in, and yet I couldn’t shake how real it felt. If nothing else, Letts has a handle on the emotive core of human nature.

The Stasis is a powerful work. It dares to question everything from what constitutes family and the nature of morality. It brings you into the depths of despair and then pulls you out, only to shove you back in once more. It’s a fantastic book, for all ages, and one that I’m not shy at all about giving a heartfelt recommendation to. The best of the series so far, which says a lot. By the end, you’ll think of one line Mira states at the beginning of the novel – The only inevitable truth is death – and hope that the characters will come to realize that despite the nugget of truth of that statement, there are many inevitable truths.

Death is only one of them.

Available in ebook format for the: