Review: The Gods of Dream by Daniel Arenson 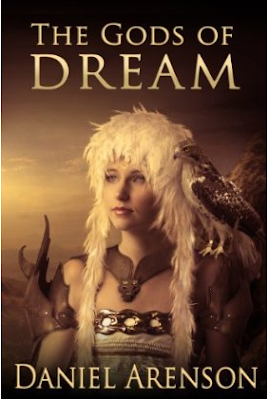 All my life I’ve held the opinion that fairy tales come to us from the darkest depths of imagination. They are stories of suffering and grief wrapped up in a bundle of cutesy imagery, mythical beasts, and social disorder. They come as warnings: Little Red Riding Hood and Hansel and Gretel against the allure and dangers of child predators, Jack and the Bean Stock against the perils of experimentation and exploration without first understanding the consequences…and these are only a few examples. They are at their core disturbing, grim tales, meant to pass along a necessary social message.

This is what The Gods of Dream, written by Daniel Arenson, accomplishes. In spades.

The Gods of Dream is the tale of Cade and Tasha, twins from a never-disclosed, war-torn country, whose parents were killed during a bombing at a local market. They are forced to leave their home and travel to a new country, where they are alone, afraid, and despondent. Tasha hates life and has tried multiple times to end it. Cade does his best to support and coddle her, his own war-ravaged hands constant reminders of the past they left behind. He does everything he can to give his beloved twin a reason to live.

Well, they have one. For reasons never fully explained (and thankfully so), Cade and Tasha have been granted access to Eloria, the true land of Dream. In this reality they are Talon and Sunflower, children of the illusory wilderness, unscarred (both physically and emotionally) by their guilt, sorrow, and the horrors of their past. When in Dream they cavort like the free youths they should have been, before the real world cruelly tore all that away from them.

This carefree existence is not to last long, however, for it seems that Phobetor, the ruler of Nightmare, obviously the counterpoint to Dream, has set his sights on conquering the sleeping paradise. Cade is recruited into the fight, told he must defeat the evil prince, and heads out on a long, long quest. Tasha, for some reason left out of the original plan (actually there is a reason, though it’s never spoken, and that reason is sublime and necessary), sneaks in and joins her beloved brother on his journey, disguised as a mouse.

Along the way Cade and Tasha meet all sorts of strange and wonderful creatures. They are the gods of Dream, and they’re fantastic creations with roots firmly planted in Native American (or any other naturalistic culture’s) lore. Each resides in (and is master of) a certain location and aspect of Dream. These gods have lived for thousands of years, and they take it upon themselves to assist Cade and Tasha in whatever way they can.

The twins journey for weeks (possibly months) through the landscape of Dream and enter Nightmare. I could go on and on describing every step of their journey, but I won’t. This review would be ten pages long if I did that. Just believe that there are a great many plot points in the book that are worth mentioning, but what interests me more than anything are themes, and that’s what I’m here to discuss right now.

One of the first things I noticed when the chapters started shifting between events happening in Dream and Nightmare, respectively, was the paradigm of these realms. Just as Dream’s gods are constructs of the “real world” – elks, cats, lions, hippos, pandas, etc – so is the landscape. It is filled with earthly trees, grass, rivers, and gardens of flowers. There is a day and night. There are oceans and beluga whales. There is also a natural order to the land, represented in pockets that depict the seasons of Earth. The lands of Nightmare, on the other hand, are cracked and burnt in some places; in others, the ground is covered with what could be skin. The trees there are likewise fleshy, covered with eyeballs. The creatures that inhabit it are gruesome, beasts of fangs, spikes, hooks, fur, and bodies that don’t seem to follow a natural order (aka shark head on a wolf’s body, etc). These unsavory citizens carry themselves with utter hatred and intend to harm, and every emotion is taken to the extreme. To break it down, Dream is the land of balance and healthy imagination; Nightmare of radicalism and brooding darkness. Sure, at first glance one might say, “But doesn’t the existence of Nightmare balance out Dream?” And the answer to that would be no. Some of Nightmare’s inhabitants were born in Dream, and they were born the way they are – wicked, cursed, unsavory – and at least one was told he did not have to leave despite this. That, in and of itself, demonstrates that the world of Dream is evenhanded. Because of this, Nightmare is actually a weight that tips the scales toward darkness.

(Not to mention that Dream exists seemingly of its own accord, while Nightmare needs a motor. It’s powered by a subway system that runs beneath its soil. I won’t explain what this subway system is or how it operates, because I wouldn’t want to give that away, but trust me when I say it’s one of the most inspired and original ideas I’ve ever set my eyes upon.)

The creative inventions of the world aside, the emotional threads are spectacularly done as well, in fact more so. Cade and Tasha really feel like damaged souls. They’re full of doubt and guilt. Tasha is nearly pathetic in her unhappiness, and you pity Cade for how hard he tries, even while he’s doubting his every action. In every way it makes sense that these two were the ones chosen to save Dream, because they needed to be saved just as much. They needed to rediscover beauty even in the face of ugliness and evil. And I think that might be the main point: that there is splendor all around you, that if only you’d take the time to actually deal with the hardships that come upon you, you’d bust out on the other side realizing all you’ve had and all you could have. Tasha, herself, embodies this. She is small in soul and scope at the start of the novel. In this way, it’s no wonder that she chooses to be a mouse when she crosses into Dream. For she is afraid of everything, her fear and sorrow have made her as insignificant as a creature that makes its home in shredded bits of discarded paper. In this case, that discarded paper is her life, both former and present.

All of this is sad yet beautiful to read, and I have to admit that on more than one occasion I found myself getting teary – especially at the beginning and end of the book. The middle is where the action is, and it is wonderful, but let me tell you…the emotions that run through these opening and closing segments are just about perfect. We see Tasha staring at her bandaged, scarred wrists, and we sob for her, when it would be very easy, if the work wasn’t crafted as well as it is, to say, “Just get it over with, already.” The writing helps in this regard, with flowing sentences and vivid description. Really, I can’t say enough good things about it.

So why, one might ask, did it not receive a perfect score? (Yeah, I have to be a little bit critical.) Two reasons. First of all, author Arenson has a habit of repeating things, important points that need to be remembered (such as the reminders that Cade and Tasha have to save Dream…or else.) Now, I get that, but I thought it was done just a tad too much. I understand that this is the author’s style, however, and it really doesn’t distract from the story. The second is the character of Phobetor, the ruler of Nightmare. His repartee his demon wife is eerily similar to the interplay between a pair of characters in another one of Arenson’s books. Now, I almost didn’t mention this, but I felt the need to, if only to assure readers who’ve read the author’s other works that these sections are short and few. In fact, there are only two scenes that actually have both characters in them. However, they’re both towards the beginning of the book, and I want to tell any who might notice that the characters are, in fact, quite different, as the meat of the tale bears out and their interactions cease. I wouldn’t want anyone to put the book down because of something minor such as this.

On a whole, The Gods of Dream is a very impressive, nearly impeccable work of art. It’s The Neverending Story meets The Dark Crystal meets The Odyssey. It surges in parts, lingers in others, and always leaves the reader with the impression that they’re taking in something important. It teaches a lesson about pain and what it takes to withstand it. It shows how important life is, how important love is, how important family is, be them blood or otherwise. It takes you on its journey of imagination and leaves you both panting and sighing at the fantastically bittersweet, yet hopeful, ending.

In other words, it’s magnificent. And I have a sneaking suspicion The Gods of Dream is going to end up being one of the best books I read in 2011. It gets the highest recommendation from me that a single book could possibly ever get.

Purchase The Gods of Dream in ebook format for the: