Review: She Smells the Dead by E.J. Stevens 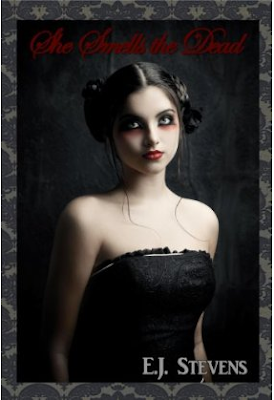 I’ve said before that I have no love of paranormal romance as a genre. It’s too girly, too gushy, too intrinsically self-absorbed and flighty, to be worth my while. I mean, who wants to read about some young girl with “special talents” who falls head-over-heels in love with some otherworldly creature?

Uh, apparently I do. So color me a liar.

I received She Smells the Dead by E.J. Stevens as a review copy, and honestly I was excited to dive into it. No matter my previous statements on the matter, the truth is I’ve had a long and enduring love for Buffy the Vampire Slayer and trashy romance novels. It’s the inherent impracticality of the stories that draw me in; how can you not feel affection for a story told about youngsters who want nothing more than to be naïve and free, yet have massive, mythical responsibilities heaped on their shoulders? It offers us a chance to explore adolescence without having to relive it, in many ways offering up an idealized version of teenagers without ever losing sight of the inborn selfishness and idiosyncrasies that come with being a teen in the first place.

She Smells the Dead introduces us to Vanessa Stennings, a girl who likes to be called Yuki (we’ll get into my trepidation over the popularity of Japanese culture among today’s youth another time) and who possesses a very quirky paranormal talent – like title of the book suggests, Yuki can smell the dead. As she says in the prologue, this isn’t like smelling rot or something of the like. Instead, what we have here is an actual haunting; a ghost wants to tell Yuki something, and so gives her clues through her olfactory senses. Think The Sixth Sense with nothing but your nose to guide you (and minus one creepy little boy). I found this to be a very original innovation on a somewhat overused theme, which made it stand out.

Yuki is a senior in high school. She has all the shortcomings of any girl her age – indecisiveness, doubtful of her future, obsessed with clothes, falls in love with the wrong guys – and yet she is still almost idyllic in the way that she has this (recently discovered) power and makes it her goal to help those wayward spirits haunting her find their way back home.

For support, Yuki has the prerequisite quirky cast of friends – Emma, a brilliant vegan with a tendency to seek out and expose oppression against the animal (and insect) world, and Calvin, her scruffy bff-for-life (who might also be something more than that). Just as in shows like Buffy and Smallville, this little group bands together to help Yuki solve the “spirit problems”, researching at the public library and going on (sometimes not very well thought out) investigative ventures. Many times the solutions are outrageously easy (not to mention unexplained), but that’s okay. This isn’t a book intent on bending your mind.

It is all pretty formulaic, but She Smells the Dead gains its wings with dialogue (conversations flow without a hitch, which takes copious amounts of talent) and an imaginative reclassification of standard tropes. As an example of the latter, I must bring out a plot point that may be a spoiler (and some may roll their eyes at): Calvin is a werewolf. However, author Stevens has created a fresh perspective on werewolvery by doing the unthinkable – going backward. She fastens their existence to the root of the original (Native American) shapeshifter myth; a spiritual partnership between creatures of the wild and man, beneficial to both with nary a mention of curses or evil deeds. When I read this I wanted to stand up and say, “Bravo!” Very well done, indeed.

There are quite a few customary themes to the work, with those of self-discovery and duty climbing to the forefront. As you might have been able to tell, I appreciated Yuki’s steadfastness when it comes to her obligation to the dead (as well as the difficulty with figuring out their problems with only something like, say, the smell of vinegar to go on). But the scenes where she trains with Calvin, trying to harness her power, are truly well done. We get to see her weak – both with a burgeoning love for her old friend and the doubt of her capacity to channel her abilities – and strong. She is a young girl facing seemingly insurmountable odds, yet she never once really hesitates.

There is an innocent quality to the work that I appreciated, as well. I think, at the end of it all, that’s the most appealing facet. Like with the Harry Potter series, we see young people (who could be any one of us) grow up before our eyes. They think and act like the teenagers they are, but hold an almost preternatural sense of honor. Looking back on my own life, when reading material such as this, I sometimes wish I could have as sturdy a head on my shoulders as they do.

On the minus side, Stevens has a strange habit of interjecting Yuki’s thoughts into the text, even though they are directly preceded by information that makes those thoughts repetitive. And redundant, too! (See what I mean?) At first I found this quirky and even a bit funny, but as the story went on I started to roll my eyes whenever something like that came across. A slight drawback, but a bearable one.

Other than that, there really isn’t much to complain about. Not that I would want to. I had a lot of fun reading She Smells the Dead. It’s nostalgic in a wish-you-were-here sort of way, and the mushrooming young love between Calvin and Yuki is something like a bunch of kindling teetering perilously close to an emotional firestorm. It’s well-written and it flows, it’s not too violent, and surprisingly original. And it’s also very short, as it is basically the introduction into a series that continues with the second book, Spirit Storm, a book I’m itching to dive into, which will undoubtedly reveal the solution to the rather ingenious cliffhanger of an ending.

Yes, I recommend She Smells the Dead. This man fell in love with it, and I think women of all ages will, as well.

Purchase She Smells the Dead: