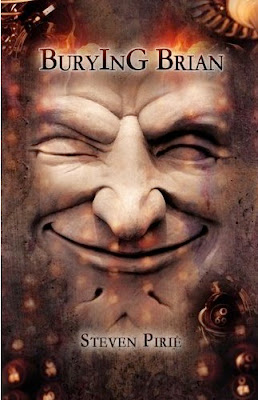 When I read Digging Up Donald four years ago, I stated that it was the best book I’d read in the last twenty years, and I meant it. I’d known Steven Pirie for a long time through writers’ groups and other online venues, and knew he possessed a wit and charm that few others could match, but never in my widest dreams could I have guessed that a book written by someone I considered an acquaintance would possibly stand alongside the likes of Douglas Adams, Clive Barker, and the rest of my all-time favorites.

And yet it did, so when Mr. Pirie announced that he had written a second offering that takes place in the same universe, I eagerly requested a copy for review. As an odd happenstance (at least for me), I never once questioned if Burying Brian, this aforementioned second book, would reach the same heights that Donald did.

Burying Brian brings us back to Mudcaster, that odd little town sitting snug in the English countryside, where the forces of good and evil perform their seemingly never-ending dance of power. This time God has thrown his all-powerful self into the ring as well, because for some reason known only to God (He does work in mysterious ways), He’s stricken with the urge to head back down to Earth and live amongst the mortals yet again.

The Mother and The Father, the old (very old) lords of balance in Mudcaster, are aging, with The Mother verging on entering Grandmotherhood, which itself carries a litany of “changes”. Because of this, it’s up to their daughter Maureen and her husband, a ne’er-do-well simpleton named Brian, to set things right and stop the demons of hell from bringing about humanity’s Final Judgment.

Brian, in particular, has a large part to play, the biggest of all. In Donald he was a rarely seen character, more used to be the butt of brilliantly sublime sexual innuendo. He has come full circle once Brian begins, however, and he’s chosen to go on a quest, to learn all he can about the failings of the human race so he can properly defend the sins of man. His journey takes him from the dart competition at his local pub to the bowels of hell. His trip is long, often times hilarious, and always affecting. Being a bit of a damp lettuce, Brian many times suffers through his trials only to emerge on the other side with his innocence intact. Because of this, I couldn’t help but think of the themes presented in Galapagos by Kurt Vonnegut, in which humans are said to have been cursed by their big brains and even bigger ideas. As Brian vividly displays on every step of his journey, when you live in a world of such unnecessary complexity, sometimes the simple answers, those we overlook, are the ones we should be seeking out.

On the whole, Burying Brian doesn’t just approach brilliance but completely surpasses it. The prose Pirie uses is clever, never dull, and brings about a sense of poignancy that does what the best literature is supposed to do – make you think. The world he’s created is vast, with layers of religious mythology piled on top of everyday existence, creating a setting that is equal parts mundane and fantastic. Common folks and jobs (such as undertakers) are expanded upon, given far-reaching implications and meaning in the history of the universe. He also uses “funny physics” to help drive forward the plot – something as routine as the sequence of the bingo balls at the local old-folks’ home have dire consequences to the order of the cosmos – further illustrating the absurdity of the unnecessary complexity we humans must deal with on a daily basis.

In all, I can once more say that Steven Pirie has done it. Burying Brian is more than an equal to his last book; it’s an indispensable companion to it. To this reviewer’s eyes, Pirie is the greatest writer of his generation. Burying Brian will excite you, make you laugh, and cause you to question all those mores we all hold as law, be it in regards to religion, science, sexuality, or marriage. Burying Brian is the best book I’ve read in a long time, and this author needs to be placed in the pantheon of other greats, alongside the likes of Bradbury, Vonnegut, Adams, Pratchett, and Robbins. This novel is well worth anyone’s time, and I give it fifteen thousand enthusiastic thumbs up.

And in Paperback at: