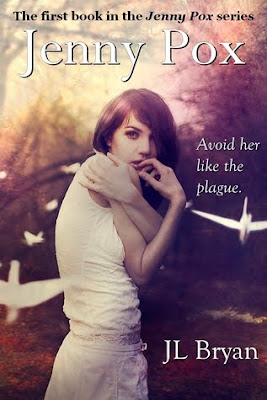 The teen years. A time of awkwardness and confusion, of inner turmoil and the search for one’s self. Throw into this the pressures of school, the chaos of personal and family relations, and the conflicting messages when discovering of one’s own sexuality, and the stress multiplies. This is hard enough on a normal child, but imagine being someone who has a problem – a real problem such as a deformity, mental handicap, or social deficiency. Then the stress involved with simply growing up becomes that much more difficult.

In a lot of ways, this is the root of the conflict J.L. Bryan explores in his amazing horror yarn, Jenny Pox. He takes the pressures and cruelties of youth, adds in a dash of the supernatural, and what comes out on the other side is beautiful in its viciousness and odd innocence.

Jenny is a lonely child, growing up without a mother, with her alcoholic, depressed father the only loving adult in her life. Jenny is a troubled child, born with a striking physical deficiency – she can’t touch any living thing, lest they die a horrible death as a bane of sickness infuses their bodies…the Jenny pox. So she grows up in solitude, left to imagine what life would be like if she could only be like normal kids, playing, holding hands, kissing, knowing at least the first budding flutter of love.

Her life is spent avoiding people at all costs, and she at all times wears clothes that cover up the majority of her body – including gloves for her hands – that make her an object of ridicule. And when, as a younger child, she has a run-in with the ironically named Ashleigh Goodling, the daughter of the local preacher and a girl who will grow up to be her main foil, the resulting confrontation leads to her being an object of ridicule and fear.

For her part, Ashleigh is the mirror image of Jenny. Strong where Jenny is weak, outgoing where Jenny is introverted, Ashleigh embodies everything Jenny sometimes wishes she could be. Once they reach high school, Ashleigh becomes (of course) the head cheerleader, leader of the student body, and mouthpiece for abstinence and virtue. And this is where the not-so-subtle brilliance of the story lies, for though Ashleigh seems to embody all of the cherished Christian values, her purity is purely surface-level; a disguise to hide her quest for power and domination.

It seems Ashleigh has a “special talent” just as Jenny does – the ability to make people love her. As does Ashleigh’s boyfriend Seth, who can heal most any wound, superficial or mortal. It is in Seth that Jenny eventually finds a like-minded soul, and when she is able to get him out of Ashleigh’s scope of influence, she is allowed to grow as a character, to experience the exhilaration of physical contact and the joy of finally belonging.

The novel is set up much like Stephen King’s Carrie, with the cruel school children – and the rest of the townsfolk – pushing Jenny’s buttons until the final confrontation, when Jenny pretty much loses her mind. The carnage that follows is disturbing yet understandable, not the least of which reason being that Bryan successfully entrenches us in Jenny’s brain, allows us to feel her longing, pain, happiness, and confusion. So when she flips the switch and the story takes a turn down the path of ultimate darkness, though we scream out, no, don’t do that, we completely get why the poor girl goes down the path she does.

Jenny is the perfect metaphor for the everyday lost soul. Even those of us who were in places of popularity in our youths can relate to her much more than the malevolent Ashleigh. Yet this is not the only metaphorical device the author uses. His portrayal of Christian morality as a means of control and subterfuge is inspired; in a way, he’s saying that experimenting while growing up is natural, and that placing false restrictions on ourselves is done not by the ones experiencing the growth, but those wishing to capitalize on the confusion of youth, a way of building an army of likeminded individuals sympathetic with a certain cause, complete with all the prejudices, hatred, and influence that have been passed down through generations. Given the state of our culture today, this is downright frightening.

I think this aspect of the plot may be misconstrued by readers. In presenting us with the iniquity of fanatic belief, Bryan isn’t saying Christianity in itself is bad, but that the way the doctrine is warped and beaten into the heads of our children is dangerous. As a reader I appreciated the message, as a human I wished more people would take a deeper look and understand that diversity and individuality are what drives culture to accomplish great things.

Jenny Pox takes all the tropes of young adult fiction, tosses them in a pot, shakes them up, and then reorganizes them into something meaningful, a novel written for adults using children to explore the deeper reasoning behind our own intolerance. The kids are kids, acting in a way we all did in our youths, not presented as ideals but real people. You will find no damsels in distress here, no characters that derive their meaning from the opinions of the ones they’re infatuated with. Abusive relationships aren’t puffed up as being more than what they are, each character is in charge of their own self-discovery, and misogyny isn’t glorified. Even Jenny, in her weakest state, is a strong individual, one we all can sympathize and grow along with. Even the mystical aspects at the end of the book that set up the rest of the series, and the somewhat clunky execution of the final confrontation (the only reason this book didn’t get a perfect score) don’t take away from this.

Pick up this book. Read it. Enjoy it. Think on it. It’s a great example of horror with heart, of a story that goes against the norm and uses the fantastic to heighten real events, real emotions, real experiences. Yes, I will say that I adore J.L. Bryan’s writing. This is the second book of his that I’ve read, and it seems with each experience, my enjoyment and appreciation for his style and message only grows along with the dazzling characters he’s created. He’s a writer to watch out for, to dive into, to explore.

This certainly won’t be the last book of his I’ll read, and it shouldn’t be for you, either.


Purchase Jenny Pox in ebook format at the following outlets: