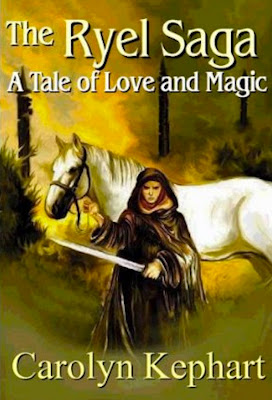 Most of the time when I pick up a book and see this in action, I roll my eyes and mutter, “Oh, no.” There are just way too many authors that fall in love with their own words, with their ability to craft clever phrasing. They overdo it and overdo it until you just can’t stand to look at the endlessly droning sequences of words any longer. This is usually the result of a writer who’s trying to emulate “traditional” literature without understand what that is in the first place. I’ve struggled through a few of these types of books, and it never ends well.

However, there is a rare breed of verbosity that stems not from self-indulgence, but the uncanny ability to turn a manuscript into magical, epic poetry. In these instances the words are necessary. They build atmosphere, envelop the mind, and spiral the reader into a world they could’ve never imagined.

That, my friends, is Carolyn Kephart’s The Ryel Saga in a nutshell.

I have to admit that at first I was a little wary of this book. It’s long (twice my usual 120k word count limit), it’s wordy, and the plotline spirals in many different directions, seemingly at once. But what I failed to take into account as I first dove in was that this is the work of an author at the top of her game, a writer who fully understands human emotion, doubt, and yearning, a woman who knows how to build a world and recognizes that there are many, many different types of beauty…even in darkness.

The Ryel Saga is named after its main protagonist, Ryel Mirai, a wysard (aka magician, sorcerer, mage) from the mystical city of Markul. He leaves the city in which he’s been raised since his early teen years (when he was lured from his home in the Steppes by his uncle Edris) when he is offered a vision of his dearly loved mother, stricken with sickness and dying. Being well-trained and powerful in the use of the Arts (the Markulian term for magic), and having been trained to be a healer, Ryel brings it upon himself to save her.

Along the way he discovers that he is being sought by a daemon named Dagar, an old sorcerer of dead magic (I guess you could call him a necromancer) whose soul (or rai, as it’s called in the book) lives on even after his body has been destroyed. It seems Dagar wants Ryel’s body, and he’ll stop at nothing – and stoop as low as he can, making Ryel’s life far beyond miserable – to make that happen.

Ryel has other adventures, as well. He uncovers lost family, finds out information about his beloved uncle Edris that rattles his world and turns him into a man possessed, falls in love, thwarts a revolution, starts a revolution, uncovers the mysteries of his Art and its legacy, suffers an ancient malady, and finally fights in a massive battle to save not just the city of Almancar, but the entire realm, as well.

There. I’ve just compressed seven-hundred pages of plot into three short paragraphs. Of course this isn’t everything there is to it – there are intricacies aplenty woven throughout the story – but if I were to make this an actual recap, the review would be fifty pages long.

And besides that – and though this might be funny to say – the strange thing about The Ryel Saga is that the plot, as complex and well thought out as it is, is almost a secondary aspect of the book. Actually, now that I think about it, it might be third in line.

The first thing that grabbed me about the book was the scenery. I mentioned at the beginning how this reminded me of poetry, and the settings are what made me think of this concept. Each city and realm visited is so vividly described that they come to life in the mind’s eye. But, oddly, there is a lot left to the imagination, as well. This might sound like a contradiction, but it’s not. From the sway of the Steppes grasses to the mists surrounding Markul to the gardens and excesses of Almancar to the filthy, deprived buildings in and around the cursed city of Ormala, most everything is explained…so much so that what is left out feels mystical, such as the feel of the street under foot or the gust of the wind on a character’s face. It’s a strange sensation to have while reading…and a wonderful one.

The second, and most fantastic of all, are the emotional ties that bind the characters, both to each other and themselves. There is love aplenty – between siblings, lovers, old rivals, even enemies. There is hatred, shown the most in disease and the scars that result from a life filled with torment. (Two characters, the brothers Essern, beautifully illustrate this point. Look out for their characters. My two favorites in the entire book, after Ryel, himself.) There is the anguish of loss, and the hope that some how, some way, those lost loves might be returned to you. There is longing, for life, love, and family. There is honor amongst heroes, and none among the religious.

And this, as a matter of fact, might be the most profound aspect of the story. In the world of Destimar, religion is as much a bane on the populace as would be cancer on the human body. Religious leaders use their preaching to motivate, organize, and manipulate their charges. And yet the text does not lose sight of the everyday person’s need for belief. I completely loved and appreciated this facet of author Kephart’s storytelling. She comes across as evenhanded, highlighting the wonders and necessity of faith while at the same time illustrating via her fantasy world the way leaders throughout history have used the peoples’ desire for understanding and salvation to turn one sect against the other, triumphing the longing of the many in order to heighten the gains of the few. She doesn’t form an opinion about this and isn’t preachy; she just presents it as simple fact. Though truth be told this reviewer thinks she tips her hand at the end and lets us know, in the tiniest of ways, how she might actually feel about the subject of spiritualism and conviction. I could be wrong, but that’s the way it seemed to me.

Above all else, The Ryel Saga is the story of faith – faith in one’s self, in one’s principles, in one’s ability to overcome. Ryel is the embodiment of this. He believes in his quest. He may doubt himself at times, but he never truly falters. He knows what he’s capable of and trusts in his Art, his magic, and his capacity to learn. In fact, throughout the whole book he never stops learning. He’s like a giant sponge, an advocate for the quest for knowledge, of the viewpoint that to gain knowledge only leads to the desire for more knowledge, and that in the end, we can never stop, but we’d be damned to a life of slow death if we stopped trying.

In case any reading this review need it spelled out for them, despite my initial misgivings, I fell in love with this book. The Ryel Saga is a poignant, touching, somber, and exhilarating read, all in one. The sentiments are real, the small scenes take priority, and the action sequences are tastefully done. In a lot of ways it’s like going on vacation to the island of St. Thomas. You know it’s ornate, you know it’s a commitment, and yet once you get there you can’t help but sit back and enjoy the experience. Reading this book is just like that – like sitting in the sun, letting the emotion of the moment grab you, and allowing it to take you where it may. To run your eyes over each word is a grand event by every definition of the word grand. Let it capture you, let it overwhelm you. Once you reach the end, you’ll understand that you’ve undergone something rare, something beautiful, something you might only see two or three times in your life.

At least this reviewer did. And it’s definitely an experience I’ll never forget.

(Final note to say I docked a single point from the execution grade because of some minor formatting errors, aka a few missing quotes and some character name confusion. These weren’t major issues, however, so the damage is minimal. Definitely does not take away from the enjoyment of the story. Obviously.)

Purchase The Ryel Saga in ebook format for the following devices: