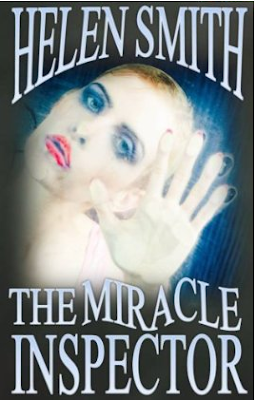 The most wonderful thing about being a reviewer is the opportunity to uncover little gems that I might have otherwise overlooked. For example, I don’t usually read literary fiction…not because I have anything against it, but simply for the reason that I enjoy reading other things so I don’t usually seek it out. Luckily though, authors and publishers send me books to review, which eliminates that particular variable from the equation.

Because of this, into my life steps The Miracle Inspector by Helen Smith, a generous morsel of science fiction/dystopian/literary goodness.

The “Miracle Inspector” of the title is a young man named Lucas, who lives in London with his wife, Angela. He’s called a miracle inspector because he, well, inspects miracles. You see, all of Britain has been segmented in this fascinating world Smith has created, with London being the apex of underhanded, dastardly government practices. Women aren’t allowed to leave the home exposed, men are considered pedophiles until proven…well, okay, they’re just all considered pedophiles, and naysayers who speak out against the ruling party – whether they realize they’ve done so or not – are quickly imprisoned and left to rot. With this knowledge, it comes as no surprise that there is a need of a miracle inspector. When everyone’s life sucks, there has to be an urge to do something – anything – to make it better, even if it’s only pretend.

Lucas is a complicated man. He loves his wife dearly and is overly protective of her, yet constantly pines for that which he can’t have. He’s immature and a bit bratty at times, utterly paranoid, and taken to bouts of underhandedness, himself. Thoughts of sex constantly invade his thoughts, and he knowingly plays his fellow government employees against one another, all the while promising his wife that he’ll do something that is nearly impossible – move with her to Cornwall, where supposedly people are free to live life as they choose. Does this sound like the thought pattern of a sound adult to you? If it doesn’t, that’s because Lucas isn’t a sound adult. He’s twenty-five, and yet he’s stuck in a state of arrested development. In fact, almost all the characters living in London are – mainly because with the threat of terrorism, after the borders were walled off, the older generation was henceforth eliminated, either stolen away in the night or killed outright. So what we have here is the majority of the populace being children who’ve raised themselves, and are therefore not completely evolved emotionally. It’s really quite sad.

This goes the same for Angela, of course. She’s a generally unhappy person, lonely, and a dreamer. When Lucas’s renegade uncle Jesmond – a beat poet bringing a message of revolution and freedom to the people and is therefore an outlaw – drops off a packet of letters at the house, Angela hides them and reads them, letting the words take her far away from the disappointment, solitude, and boredom that fills her every day. Her relationship with Lucas is a bit odd – they really only communicate through sex, like a couple of horny high-schoolers – and these letters only drive home the fact that she’s missing out on something huge in her life.

When Lucas meets an older woman named Maureen, whose daughter Christina suffers from some sort of mental disorder, his life is thrown into a tailspin. He develops feelings he doesn’t understand about both mother (who called up requesting a miracle inspection) and child, and he goes against the rules and brings Angela to meet with her. (Women gathering together is illegal unless they are family, which creates a lot of rather humorous discussions about falsified “familial” bonds.) Suddenly, Lucas decides to stop playing at promises and begins to formulate a plan, and it is this childish belief that “no one can hear me!” that gets him tossed in a prison cell while Angela, Maureen, and Christina flee London, finding adventure and horror (and still more depressing societal amalgamations) in the provinces outside the city walls while they attempt to reach Cornwall.

I’d be lying if I said this book was a bundle of happiness and joy. It’s rather the opposite – dark, depressing, and seemingly hopeless. But that’s all right, because Smith has her story to tell, her point to make, and it really is a doozy.

This is a tale of bleakness, of what would happen if the child within us never grew up. It focuses on the shadowy aspects of society and ponders a world where these low ideals are presented with a cheery demeanor. It examines the bonds between women, between mother and child, between husband and wife, and tosses gasoline on the simple fact that many take the lives they’ve been so fortunate to have for granted. It examines the role of women in society – any society – and dares to ask whether the right sex holds the power and questions if a driving force behind the subjugation of women is fear that they might actually make sense. And it is also a text that takes responsibility for its actions – there are no “convenient” plot contrivances here. Each and every word means something, must be read once and then again, mulled over, and then discussed.

In other words, this is an absolutely exceptional piece of fiction, a work of art befitting the best in socially-conscious literature.

The only real problem I had with the book is that the exact reasons for society’s collapse are never fully explained. In and of itself, that isn’t such a bad thing, but I did find myself being slightly disappointed come the end, when I’m still left in the dark. There were occasions where I kept asking, “Please tell me HOW!” This is the one and only reason I docked points, and to be honest it may have more to do with myself thinking of how I would write the book. But still, I couldn’t help but think that Smith could have made her many points even more affecting if she gone into more detail.

Overall, though, this is a great, great read. Helen Smith crafts a story like she’s the British lovechild of Kurt Vonnegut and Philip K. Dick, only with a feminist slant. And The Miracle Inspector is a powerful, insightful, darkly funny, and principled conception. It’s short on page length yet long in ideas, and each and every one of them will spit you out with your head spinning as you keep asking, “Why?” while making you come up with your own answer.

Trust me, that’s not a bad thing.


Purchase The Miracle Inspector in Ebook format from:

Just came across your blog, through reading about Amanda Hocking's Hollowland. (Love your review on that, by the way.)

But I just wanted to say that your reviews are amazingly well-written and in depth that they read like their own story and pull me into the world of the story. It not only makes me want to read the novel you have written about, but it also makes me want to read some of your own writing as well.