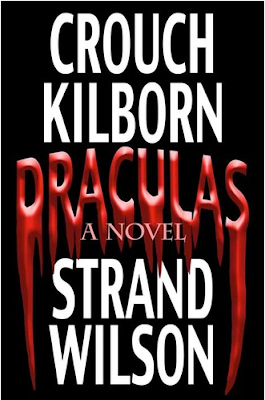 A few weeks ago I suffered a serious case of fantasy over-exposure. After opening the next novel on my list, I found myself dreading yet another exploration into world-building and magical powers. So, to relieve my readerly doldrums, I put it down and picked up another book, one that’s been hiding in my Kindle since I bought it the day it came out. That book…Draculas, by the combo of Jack Kilborn (aka J.A. Konrath), Blake Crouch, Jeff Strand, and F. Paul Wilson.

I'm glad I saved it, for it was the cure for what ailed me.

Draculas is a wham-bang, smack-em-around, eviscerate-the-enemy, action-packed adventure. It takes place in the boondocks town of Durango, Colorado, where the staple eccentric old rich guy, Mortimer Moorecock, has been delivered a very special package – the skull of an unknown, ancient being; a slice of archeology (complete with a mouthful of dagger teeth) that could possibly, if it proves real, be the missing link between the myth and reality of vampires.

Due to a self-imposed wound involving said artifact, Mortimer is rushed to the hospital. It is there, in Blessed Crucifixion, that the rest of the story unfolds. Regular, everyday people undergo startling changes, becoming blood-driven maniacs, their physical forms changing in virtually a blink of an eye. Bedlam ensues, as those poor survivors are forced to fend for themselves in this incongruously-named, backwoods medical center while murdering, scissor-mouthed freaks – the draculas from the title, though they’re nothing like traditional vampires except for the bloodlust – run amok.

Taken at face value, the rest of the book is standard hack-and-slash fare. The text is filled with gore, with people tossed into unbelievable circumstances and responding in some pretty outlandish ways. The body count becomes too high to count by the time the fifth chapter rolls around. In a way, the violence on the page is almost mind-numbing. And I mean this in a good way. A very good way.

The thing is, Draculas is the furthest thing from a serious book. Is it horror? Yes. But more than anything else, this is satire to the extreme. (The authors tell you this right from the dedication: For Bram Stoker, with deepest apologies, it reads.) Every character is a cliché – the skeptical researcher; the lawman obsessed with ultra-powerful weapons; the egotistical small-town doctor; the brave nurse who’s been shortchanged; the idiot lumberjack with a heart of gold; the clown with depression issues; the spoiled little girl. However, these clichés are exaggerated to the point of absurdity, which demonstrates a group of authors that 1) don’t take themselves too seriously, and 2) are just having fun with the typical horror tropes – making the characters special by amplifying personality traits, in effect flipping truism on its head. In fact, if this book has any fault at all, it’s that there are a couple characters that aren’t absurd enough. The scenes involving these particulars are the only ones that seem a bit slower than the others – as contradictory as it is to say, in the scope of the story involved they become less real.

But these scenes are few. For the most part, we have page after page of action, of wisecracking dialogue and dismemberment gone awry. And, oddly enough, there’s some actual emotion here, as well. Toward the latter stages of the novel, when the poop really starts hitting the fan, there are a couple extremely well-written and affecting scenes. It was strange to find, especially in a work of fiction this ridiculous and over-the-top, but it was most certainly appreciated. It takes a ton of talent to do this, talent these four writers obviously possess.

The writing is very smooth and virtually seamless, to the point that the only way you’d know this was written by more than a single author is by reading the multiple names in the title. Though I’m sure each of them have a style all their own (this is the first work I’ve read by any of them), here they’ve managed to meld their different approaches to the craft into a cohesive whole. Again, that takes talent.

Draculas is an exceedingly fun read. It might not be for everyone, what with the amount of blood spilled within its pages, but for those who want to laugh, cringe, and even feel their heart skip a beat more than once, this is the book for you. It’s a grindhouse adventure that doesn’t take its foot off the pedal until the end, which in itself is hilarious in its irony and rewriting of myth. But more than anything it’s a good time, no matter how irreverent to the source material the authors may be – in an affectionate way, of course.

I had a blast reading it. You will, too.

Thanks, Robert, I might pick this up on your recommendation ...