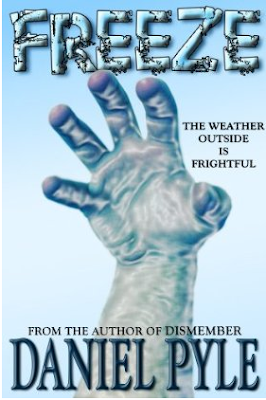 I usually start out these reviews with a bit of exposition about select themes I find within a given book, but this time I’d like to focus on something that is, in itself, a part of writing.

Some writers know theirs. Some don’t. With the best authors, you know who they are from the moment you read the first sentence. It’s a comforting, and important, trait to have. King has it. Robbins has it. Layman and Lovecraft had it. Hemingway had it in spades, as did Fitzgerald.

And so does Daniel Pyle.

From the second I picked up Freeze, this author’s new novella, I was immediately sucked in. I felt the same exact way I did when I opened Down the Drain and Dismember, previous works by Pyle – like I was about to be taken on one massive, wildly-swinging ride of terror. Needless to say, I wasn’t disappointed.

Freeze is the story of Warren and Tess, an older couple living high in the mountains with their dog during the snowstorm of the century. There are strange goings-on about the house after the power goes out, adding to the feeling that this isn’t your garden-variety blizzard. A window breaks, showering Tess with glass. There are strange sounds outside. The family car has been seemingly vandalized. And all the while the cold and isolation creep in on this tight little family, until finally, after an emergency, Warren is forced to try and brave his way down the mountain in search of help. Little does he know, there are strange beings waiting for him out in the frigid wilderness, creatures that would love nothing more than to tear him apart.

The plot is very basic – couple trapped, flees from monsters, fights monsters, encounter terrors they never thought imaginable. However, it’s the way the story is constructed – the voice I spoke of earlier – that makes this such an entertaining and unrelenting read.

Pyle does something very interesting here, and it’s a way of constructing a story that I appreciated to no end. He makes the setting, the weather, the storm and cold, as important a character as Tess, Warren, Bub, or the strange creatures outside. I read this book outside, sitting in ninety-degree heat, and on more than one occasion I found myself shivering. That, my friends, takes copious amounts of talent. The seclusion of Pyle’s words wraps around you, the wind blows inside your ears, and you can’t help but empathize with what these poor characters are going through. In effect, we are placed directly in their shoes, made to feel their fear, anger, and desperation.

In many ways, this book reads like an episode of The Twilight Zone with a little Tales from the Darkside mixed in for good measure. Nothing is explained, the ending is open to the reader’s imagination. All we’re left with are the sensations involved. It’s like being plunked in the middle of a nightmare scenario and forced to fend for ourselves, which is refreshing, and also common with Pyle. Just as in Down the Drain, there isn’t page after page of details about the nature of the monsters. They’re there, they’re frightening, and that’s all you need to know. Is that enough? It damn well should be.

There is only one aspect of the writing that I didn’t like, and it’s the single issue keeping it from receiving a perfect score. On more than one occasion, the internal dialogue of the characters’ seemed to be too much for the given situation. There were a couple examples of ill-timed, ironic thoughts that I, personally, don’t think would go through the mind of someone experiencing that kind of terror. It slowed the momentum for me a bit when this occurred, but thankfully this only happened a few times, five at most. I can forgive an author for trying too hard sometimes, and that’s what those little snippets felt like to me. And it could also just have been my mood at the time, so my point dockage is very small.

In conclusion, Freeze is a gem of a short novel that will leave you panting by the end. It’s the perfect creature feature, hitting all the right emotional notes, making you care, cringe, and rattle your teeth at the same time. And once you finish, you’ll never be able to hear a scratch at your window on a cold winter night and pass it off as nothing again. There will always be that nibble of panic in the back of your mind that says, but what if…

Which is the type of effect that all horror – hell, all fiction – should aim to accomplish.

So congrats to Daniel Pyle, because he’s created something wonderful.

Purchase Freeze in ebook format from: