Review: A Dance of Blades by David Dalglish 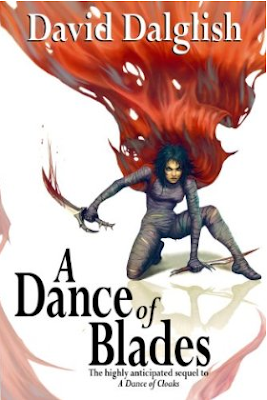 Sequels are tough business, especially when the first book of a series is extremely well written. There’s a ton of pressure to put out something equally as good, and there’s a good chance readers could walk away disappointed because the author wasn’t up to the challenge.

After reading A Dance of Blades by David Dalglish, the sequel to last year’s A Dance of Cloaks, I can tell you with all certainty that this particular writer accomplished just what he set out to do.

Blades starts out five years after the end of Cloaks. Early on we find Aaron Felhorn, the son of Spider Guild leader Thren who now calls himself only Haern, living on the streets and waging his own personal war of attrition against the thief guilds of Velderan. Gone is that sliver of innocence that Haern tried so hard to hold onto in the first book, replaced by an undying need for vengeance against the man who sullied his life. And when I say need, what I really mean is obsession, because that’s truly what it is. Haern hates his father and all those like him so much that he cannot help but paint every thief he runs across with the same blood-drenched brush.

As for those thief guilds and their never-ending battle with the Trifect, the powers-that-be in the land, all is not going so well. It seemed the aftereffects of the Bloody Kensgold, where Thren tried to wrest power away from the businessmen, has left all parties worse for wear. The guilds are in shambles, shamelessly murdering and stealing from any they wish, while the Trifect, themselves, are struggling. Alyssa Gemcroft, now the leader of the Gemcroft estate after the assassination of her father, is particularly stressed. She’s sent her son Nathanial to the north for protection while she constantly wards herself from poisoned food and the fortune her family has lost to the thieves that surround them at all times.

The thing she most needs, at least according to her advisors, is a husband. She eventually acquiesces after Nathanial is killed, apparently by the Watcher (Haern), which introduces us to the main villain of the piece, Arthur Hadfield.

Hadfield is a very strange baddie, at least when it comes to Dalglish’s work. He’s in no way supernatural, he has no otherworldly power or strength, and isn’t the face of some great and secret organization. All he is, is an opportunistic scoundrel who wants nothing but more power. That might make him the weakest of Dalglish’s villains to some, but to me, he’s the best because he’s so real. Arthur’s like a crooked politician with no moral compass, and he attracts like-minded men to his side, such as his right-hand-man Oric. Let’s just say I hated both these characters with a passion, their deeds and thoughts (or lack thereof), and that made me love them…if that makes any sense.

As for Alyssa, she’s come a long way from where we saw her in the first book. She’s a strong woman now, leading her people and doing just what leaders are supposed to do – making the tough decisions, even if they turn out to be wrong. After she discovers her son has been killed, she takes it upon herself to personally dispatch every criminal in the entire city, and hires countless mercenaries to carry out her request. What follows are a series of hellish nights as the streets of Velderan are filled with blood.

Let me say this right now – Alyssa Gemcroft very well may be the most brilliant character Dalglish has ever created…and I don’t say that lightly. She bucks trends and stereotypes and displays power and weakness in equal measure. Throughout the entire book, there is never once a mention of her beauty – it’s simply assumed that she is. As a character she is so well conceived that she almost overshadows the other particulars in this tale of deceit, violence, and woe.

Almost, but not quite.

There are characters aplenty to care about in this novel, just as in the first. We get to see the coming to power of Deathmask (who appeared in the last couple Half-Orc books), and he gobbles up every scene he appears in. We are also reacquainted with Veliana, the lady-behind-the-curtain of the Ash Guild, and Zusa, the mysterious, cloth-wrapped woman who assists both Alyssa and Vel from her place in the shadows (yet two more imminently strong female characters…I have a feeling Dalglish is trying to get to something about women banding together being more powerful than any force in the universe). Also, as readers we get to meet the Eschaton once more, Tarlak and Delysia and Brug, along with Senke, Haern’s former mentor. For those who’ve followed this author’s work, it’s a wonderful homecoming of sorts; to those who haven’t they are introduced to some pretty entertaining personalities that have been sorely missed.

But of course, with all this being said, A Dance of Blades is Haern’s show, and he doesn’t disappoint. We get to see him evolve as a person throughout the length of the novel, from angry outcast to bitter vigilante to, finally, an accepting adult who comes to understand his role in the world. I think, during parts of the book, I forgot a very important part of Haern’s makeup – he’s still a child. He’s at most eighteen years old, and as a father of a son near that age, I can honestly say that none of them have anything figured out. Life is a big, confusing, sometimes hellacious ball of experience, and it takes time to come to grips with that…especially without an elder guide, which is why I found Haern’s progress as an individual to be so profound. Though he does develop friendships by the end, most every decision he makes, he makes on his own, with very little input from others. This shows the strength of character we see when he appears in Dalglish’s earlier novels, and also demonstrates just how capable of righteousness in the face of cruelty he can be.

As the second book in a series, A Dance of Blades loses some of the innocence from the first installment, as I mentioned earlier. However, it more than makes up for that with the amount of brutality and self-sacrifice that is demonstrated within. The three-night battle between the mercenaries and thief guilds is atrocious, and there is very little care for who’s guilty or innocent. There is also one particular scene that turned my stomach, as a kind family is cruelly assaulted by Oric and some more of Arthur Hadfield’s men. Though Dalglish handles the visuals and presentation respectfully, we still get to witness the horror of these actions, and imagine the repercussions for the victims. So when you add all this in together with Haern’s mad fixation on killing every thief he can get his hands on, I guess you can say that this is a book about the loss of innocence…or a fall from grace, if you will.

Which is important in any work of fiction, because of course you have to fall before you can get back up.

In all, A Dance of Blades is a more than worthy compliment to its predecessor. In most ways it even surpasses the first book, which I didn’t think possible. It’s a novel full of treachery, disturbing images, underhanded dealings, war, and desperation, but it also shows the reader how, even in these trying times, there is still a capacity for love and friendship in the world. It says we don’t have to be alone, even if we’ve become monsters to ourselves, because no one worth a salt is ever beyond redemption.

With that, I can honestly say that this is the second-best book Dalglish has ever written, just a fraction of a percentage point behind A Sliver of Redemption. Who knows, perhaps when the final book of the Shadowdance trilogy comes out next winter, he might outshine himself again.

Knowing this author’s work the way I do, I wouldn’t put it past him in the slightest.

Purchase A Dance of Blades in ebook format: