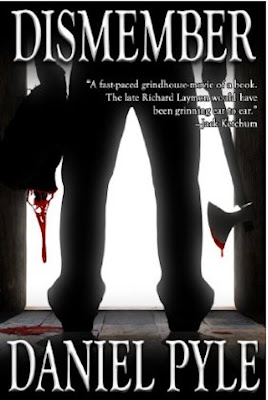 Last year, the offer was put out to me to review books for Shock Totem Magazine. Of course I gladly accepted, and immediately went out looking for material.

I didn’t have to look far. I’d reviewed Down the Drain, the fantastic novelette by Daniel Pyle, here in the Journal, and, knowing that he had a full-length novel out, I took a chance and requested a copy of Dismember from the author.

Dismember is a special book, an oddity in the most wondrous of ways. It’s odd because it bucks the trend of “horror” without losing its niche in the genre, for horror isn’t always about slime-drenched creatures (or bathtub monsters) leaping out and torturing the innocent. No, when horror is done properly it deals with the more important issues, those that keep us commonfolk firmly entrenched in our lives, everything from family to death to the loss of personal freedom. When this happens, as it does in Dismember, the terrors on the page grab hold of you and cause your heart to skip, not because something might jump out of the darkness, but because it lets you know just how thin the thread separating life and death really is.

Dismember is a brisk, almost meditative story of purity corrupted. The tale takes us on the twenty-three year journey of Dave Abbott, the only survivor of a terrible car accident that occurred while traveling with his family in the Colorado Mountains when he was seven years old.

Davy has lived a life of seclusion and fear since that day, trapped in a rickety old house by a twisted mountain man who is only called Mr. Boots. Very few details of Davy’s captivity are explained in the book, but you get the impression that Mr. Boots performed certain illicit acts on little Davy that society would most certainly not condone. I appreciated the lack of exposition in this regard, because I haven’t the desire (or stomach) to read the particulars of child abuse, be that abuse of a sexual nature (which the text suggests) or not. In fact, these circumstances are handled with style, using cursory hints dispersed through the story in flashbacks, which stick with you simply because of what we are not shown, for what our minds create to fill in the blanks is almost always more disturbing than overdone exposition.

The story picks up with Davy on his thirtieth birthday. It seems all those years in captivity haven’t done wonders for poor Davy’s sanity, because he’s hatched a plan to reassemble his dead family through any means necessary. Once this re-gathering begins, Pyle tells his story through five points of view: an eleven-year-old boy named Zach, Mike and Libby Pullman, a divorced couple trying to retain a sense of the familiar after the dissolution of their marriage, Trevor, the Pullman’s son, and Davy, himself.

Of all the different emotional threads in this novel, I found the interplay between the Pullmans to be the most fascinating. At last we’re given a divorced couple who show each other respect instead of filling the air between them with venom and petty discord. Sure, you can tell right off the bat why their marriage failed, but to them raising Trevor, their son, the correct way is paramount. Neither would ever even think of using their child’s adoration as a manipulative tool against the other, which is refreshing…and unusual in a usually cliché-riddled genre.

Despite this aspect of the plot, the driving theme of the entire book is the death and disfigurement of innocence. In a brilliant sliver of storytelling, the author contrasts Davy’s childhood terrors with the stresses he inflicts on Zach and Trevor after he abducts them. This phase of the novel reinforces Davy as a sympathetic scoundrel. On many occasions I found myself openly rooting for him to realize that what he was doing was wrong, because I realized that his state of mind wasn’t his fault. This is a guy who grew up segregated from society, under the watchful eye of a cruel guardian. His only education was through pain, and his only joyful memories are those that he experienced before he was seven years old, leaving a stunted and incomplete person. Even with the amount and degree of brutality he enacts on people, he demonstrates a massive capacity for love and thoughtfulness that actually makes his cruelty seem all the more brutal, for this is a man with psychological arrested development, and it isn’t his fault.

The differing points of view in this book were beautifully executed. The shift between the children and adults were convincing and real-to-life – the kids were kids, and the adults were sufficiently imperfect. The blood and gore is there, and it is vicious, but it doesn’t overwhelm, instead pulling you even further into the story and making your gut clench as you experience these frights alongside the characters. And the ending is a thing of beauty, as well. I was stunned by what happens, not necessarily because it’s laughable or frightening, but because it’s haunting in its unexpectedness (and simplicity). I won’t go into details, but let’s just say Daniel Pyle is a very brave man to end this book the way he did, for I’m sure there are some out there who won’t appreciate it.

This reviewer, however, thought it was brilliant.

To finish things off, I’ll say that Dismember is an unbelievably good book. It reads quickly, as I constantly wanted to flip the page just to see what happens next. It’s a story about life that centers on the mundane and how much we might overlook those simple pleasures given the freedom we’ve been blessed with. It’s a tale of the fractured soul and how much we rely on, and mimic, the family that sprouted us. But most of all it’s simply one hell of a ride, one that I am so glad I took. And for that, this reviewer must give Daniel Pyle some well-deserved congratulations on receiving only the fourth perfect score I’ve ever handed out.

(Reviewer’s note: A version of this review appears in Shock Totem #3)

Purchase Dismember in the following formats: