Review: Epitaphs: The Journal of the New England Horror Writers 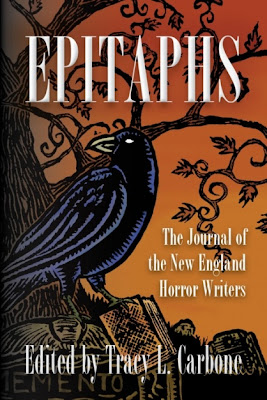 I love short stories. I love to read them, I love to write them. But you know what’s better than a short story? A whole freaking collection of them! And someone recently shipped me over a copy of Epitaphs, a Stoker-nominated collection of tales and poetry from the New England Horror Writers, a group that is very close to my heart. Of course I had to dive right in.

Okay, enough banter. Let’s get down to the daunting task of looking at the stories themselves.

To Sleep, Perchance to Die by Jeffrey C. Pettengill: Well, let’s just say the collection didn’t start out so well for me. Here we have a tale of a CPAP machine gone horribly wrong. The tone just seemed to lag, and honestly the ending seemed a bit campy, though without the fun that camp implies.

The Christopher Chair by Paul McMahon: And here we go! One of the better stories in the collection, about an antique wheelchair blessed by St. Christopher that can supposedly heal the sick…for a price. Atmospheric and full of confliction, McMahon really packs a punch with this one.

A Case of the Quiets by Kurt Newton: The first poem in the collection, and a doozy. It brings to mind horror poetry of old, with a very Poe-esque flow, and comes very close to matching the former master’s penchant for nailing the dark side of human nature coming from within the mundane.

Build-A-Zombie by Scott T. Goudsward: This one was quirky and fun, telling of a boy assembling an unusual gift from a new sort of gift shop. It made me want to know more about the world in which it takes place, which is a good thing.

Not An Ulcer by John Goodrich: Wow. This story, to me, was far and away the best of the bunch. In it a man who hates everything about the world, including himself, literally separates himself from his emotions. It’s “Be careful what you wish for,” taken to the extreme. Tremendous, and the ending gave me chills.

The Possessor Worm by B. Adrian White: A quaint little tale told through emailed correspondences between characters, kind of an updated take of Lovecraft, if you will. In the end the payoff fell a little flat. Still pretty good, however.

Make a Choice by John M. McIlveen: Truly haunting, telling the story of a madman who torments a family for a night, forcing the parents into a decision that no parent would ever—or should ever—have to make. It’s a fantastic exploration of the human condition and how survival of the fittest might not be completely erased from our cellular memory. As an added bonus, the end is shocking because of what doesn’t happen, which surprisingly makes it all the more disturbing.

The Death Room by Michael Allen Todd: Another poem, this one not nearly as good as the first, but I still appreciated the creepy undertones.

Perfect Witness by Rick Hautala: Now this is a twist. A murdered man is brought back to a sort of pseudo-life for a short time in order to testify at the trial of his murderer. The interplay between his thoughts and what might actually be happening in the world outside his rotting brain was really well done. Also, the author hints that this experiment might have grave repercussions down the road. Do I smell a novel coming? Given the author’s enjoyable style, I hope so.

Stony’s Boneyard by Glenn Chadbourne and Holly Newstein: Atmosphere, sorrow, and forgiveness rule the day in this excellently (and traditionally) crafted short. It deals with a tattoo artist and the biker whose back represents the greatest achievement of her life. Unlike a lot of stories in the collection, this one actually ends on a bittersweet note, equal parts solemn and hopeful. Really well done.

Kali’s Promise by Trisha J. Wooldridge: The third poem, and another traditionally-inspired example of getting exactly what you ask for. It’s quite entertaining and told in a repetitive way that added to the tone of dread. I knew it was well written because I guessed the ending after the very first stanza and it still had me captivated.

Sequel by David Bernard: Not my favorite. I’ve seen this sort of plot—about a horror writer who takes his inspiration a bit too literally—many times before. It’s well written, but predictable.

Malfeasance by David North-Martino: This was perhaps the most maddening story in the bunch. Just as with the previous story, I knew how it would end very early on. And yet it was crafted so intricately, I kept thinking no, I’m wrong, there’s a twist here I’m not seeing. But then…it ended just how I thought it would. Disappointing in that regard, yes, but it was still very much worth the read.

Private Beach by Stacey Longo: A fun little romp that harkens back to the pulp horror era, about two beachgoers who of course ignore a No Trespassing sign and pay the price for it.

All Aboard by Christopher Golden: The second-best story in the collection. A disquieting tale of a mother and father’s struggle to come to grips with the death of their child, with a dash of the supernatural thrown in. It really is a heavy-hearted story that thankfully doesn’t come across as heavy-handed. By the end I was on the verge of tears—and I couldn’t tell if they were happy or sad, which is a first for me.

Holiday House by L.L. Soares: This was a decent offering, about a pair of old sisters who live in a ramshackle estate (think Grey Gardens) that might be haunted, or might conceal other, more frightening entities. I particularly liked the ambiguity at the end.

Lines at a Wake by Steven Withrow: A very short poem that brings about one hell of an eerie vibe using an economy of words.

A Deeper Kind of Cold by K. Allen Wood: This one was interesting. On a space station, a woman frets while the love of her life, who is in a rather odd state, struggles to survive a mysterious sickness. The tone was fantastic, and it asks the question of what it is we actually love about a person. Though the ending was fantastic in its grim earnestness, I couldn’t help but think the setting wasn’t used nearly enough. The metaphor of the emptiness of space as compared to the emotional distance between the woman and her mate just never materialized, which I thought was a missed opportunity. That being said, it’s still a wonderful tale. That ending alone is worth the time it takes to read it.

Alone by P. Gardner Goldsmith: A very creepy and very short story of a man wiling his hours away, isolated in his home, as the world may or may not be ending outside. It had a very Twilight Zone vibe to it, which was cool.

Pandora’s Box by Roxanne Dent: I wasn’t the biggest fan of this story, about a woman who suspects her husband is having an affair and gives into her impulse to follow him. The opening sequence completely gives away the twist at the end. If only that had been cut, it would’ve been a much more enjoyable experience.

Chuck the Magic Man Says I Can by Michael Arruda: This was a really fun and idiosyncratic little tale of two sisters staying at their parents’ friends house while they’re away on vacation, friends who just may hold a secret that only the precocious younger daughter can handle. I really enjoyed it.

Burial Board by T.T. Zuma: Very moody period piece about a man and a burial board that does some rather…strange things. Well written, but for some reason it didn’t feel complete to me.

Windblown Shutter by John Grover: A kid sees his mother murdered and is haunted by the memory and the fact he never saw the killer’s face. I found this to be a fabulous study of the cyclical and never-ending effects of grief and guilt, even if the murder mystery fell a little flat.

Cheryl Takes a Trip by Stephen Dorato: Even though it wasn’t my overall favorite, this story, to me, was perhaps the most inventive of any in this collection. When a woman’s spirit is cast from her body after her mysterious death, she decided to go and do the one thing she’d always wanted to do but had never done—take a trip to Bermuda. It’s really a self-exploration piece, focusing on the way fear can rule our lives, and maybe even our deaths. I thought it was great.

Legend of the Wormley Farms by Philip Roberts: A haunted farm draws a trio of brothers into its sticky, legendary web. It lagged a little in the middle, but in the end I was actually quite shocked. I also thoroughly enjoyed how the author delved into the ways familial pressures and support (or lack thereof) can damage young minds.

The Church of Thunder and Lightning by Peter N. Dudar: An interesting choice to end the anthology, about a reporter and her cameraman on a mission to document the odd rituals of a Jim Jones-type cult. The cost of ambition without regard for human decency was certainly on display, and the function of the cult itself was a truly original creation.

And that’s it! Maybe the longest review I’ve ever written, too.

Overall, I have to say I loved this collection. While every story didn’t ring true to me, the vast majority of them did, and most of those that didn’t were still expertly crafted. There are a variety of unique voices, and in a lot of them you can certainly sense the slightly Puritanical undertones that most people who grew up in New England are saddled with. It’s an anthology well worth your time and money, and the authors are worth keeping an eye on.

You can buy the paperback of Epitaphs here: