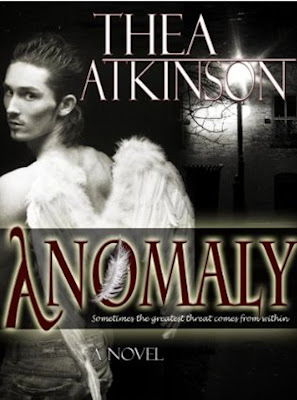 When I received Anomaly by Thea Atkinson as a review copy, I set it aside, pretty much uninterested. I accepted it because the sample was well written, but I was deep into a new fascination with fantasy and other genre fiction at that time, and thought to myself, I don’t really like literary fiction, so this one can wait a while…let me enjoy myself first.

Well, recently I glanced at my to-be-read pile, saw that book still sitting there, and decided it had waited long enough. And when I started reading, all I could think was that I should’ve gotten around to it sooner. It surprised me in so many ways.

Anomaly is the story of J, a ne’er-do-well transgender/recovering drug addict living in rural Nova Scotia. This book doesn’t have so much of a plot in the traditional sense; it’s more an exploration of what it means to be J, taking place during a few tough, stressful, and let’s face it, downright depressing days out of his/her life. No, existence is not easy for our J, who has a big mouth and a bit of a masochistic streak. J’s struggles with his/her sexual identity create a character who’s constantly on the edge of darkness, questioning what it means to be man, to be woman, to be both, or to be nothing at all.

While recovering from a particularly brutal beating, J begins to worry about his/her neighbor, whose colicky baby has suddenly stopped crying. In a feat of humanity uncommon for J (and most addicts, really), he/she strikes up a protective relationship with said neighbor,, a young woman and fellow addict who (hard as it is to believe) is actually more pathetic than J.

The bulk of the story takes place in J’s apartment and a local bar, and we get to meet his/her friend Molly, a boisterous lesbian who, herself, has far-too-long-ignored substance-abuse issues. There is also a kind nurse who is a welcomed voice of reason to the rest of the characters’ insanity, who forms a quite beautiful bond with J and ends up being a lynchpin for suggested further growth, development, healing, and self-discovery.

It might seem like I’m making fun of this book and what lies inside, but I’m truly not. When I call the characters pathetic, it’s because that’s the way Atkinson created them – and purposefully so. Having known quite a few addicts throughout my life, I found their portrayal both accurate and heartbreaking, though not without a sliver of hope. But what I appreciated most of all were the reasons for this addiction, for J in particular. I have no idea what it’s like to not know my gender, to one day know I’m a man and the next know, just as strongly, that I’m a woman. But I can imagine how much pressure that must place on an individual, socially as well as emotionally. Like it or not, we have some pretty strict public codes of conduct in this world when it comes to gender roles, and for those who choose (or have no choice in the matter) to buck them end up paying a high mental and physical cost.

This novel is told in first-person, from J’s viewpoint, and we the reader get to hear his/her thoughts on so many subjects – from the nature of religious icons to the contradictory messages of the LGBT community to how pitiable the life of an addict really is. He/she’s a very reliable source of information, for no matter how screwed up J might be, he/she still has his/her head on straight…mostly. So when J latches onto a single phrase, one used to describe the reasons her neighbor’s baby was taken away, those words gain that much more importance and a new, particularly foreboding meaning.

That phrase is repeated over and over again, and really, that’s what Anomaly is all about. It’s the story of how incomplete we are as people – all of us – and how our standard definitions, though they might help keep things tucked neatly in little boxes, often times hurt us more than anything. It’s about the malfunction of the concept of love and how often we don’t know what that word means. It’s about caring for others more than ourselves, and realizing that when doing so we completely disregard the fact we must care for ourselves, lest every action we make means nothing.

But most of all, it’s the story of life, of the struggle to survive in a world that really has no one’s best interest in mind, a world that, in effect, makes it difficult for anyone to thrive. In that way Anomaly is a difficult and occasionally stomach-churning read. But it’s a learning experience, and very much worth the investment of time.

I’m glad I invested mine.

Purchase Anomaly in ebook format from:

It's great to see this review. I really like Thea and I've enjoyed everything I've read by here. Thanks for the recommendation.

As always, you find a way to delve into the deepest parts of a book's psyche, finding the things that lie buried in the hopes the reader will want to dig.

I so appreciate these words as I feel you've exhumed all my reasons for writing the tale and was able to pick out the little nuggets.

And Moses: *wave* glad you stopped by to read the review.

Great review. I devoured this book when I finally downloaded it and wondered as well why I took so long to read it. It definitely sticks with you (and in my case haunts my dreams that night and encourages me to write my own review.)

I still think about the flash fiction piece you left on my blog--beautiful and evocative writing.

thanks Moses, Patricia, and Suzanne. I'm grateful to Robert for being so articulate. He really brings the complexities to life in a way that has even the writer nodding, 'yes, yes, that's it.'

he makes us all sound very articulate. grin